This is to help John Micheal Stokes with medical bills, and equipment he will need after his roll over accident that left him paralyzed.

You will be emailed your tickets and if you request we will also Mail you tickets our.

Sponsors
Give some love to your sponsors.

John Micheal was traveling to work on a fairly rural road in New Mexico, In foggy conditions, when a herd of elk ran out in front of him. He swerved and at that moment he lost control of the vehicle. His van went across a bar ditch and flipped several times. He was wearing his seat belt and that is what caused his shoulder injury. But the seat belt did not hold and he was ejected from the van. During the roll over the van landed on him.

This has caused him numerous injuries. He has two broken legs, and shoulder and worst of all a broken back. He has had numerous surgeries that include his spine being fused and pins put into his leg.

At this moment he has not regained the feeling in the lower part of his body. This is due to the spinal cord injury.

John is only 19 years old, and he has a long road to recovery for him. The doctors do not yet know if he will ever regain feeling or movement in the lower half of his body. But either way, he will be faced with several years of therapy to recover as best as he can.

As his Aunt, I can say John represents some of the best of this family. He is and has always been one of the sweetest most loving kids I have ever know. Even though he is several years older than my son. I have never feared to let my son go hang out with John because I always knew that John would always make sure my son was safe.

John like many of my family grew up in a very rural area. He is the kind of kid that would go over daily to my mom and dads house (his grandparents) and ask them if they wanted him to do anything. He was never afraid of hard work. He also has the most amazing personality. I have rarely seen him in a bad mood. In fact, I am not sure I have ever met someone like him that just brightens a room with his goofy smile. Even with all the pain, he is in he is trying to maintain that upbeat loving personality
Contact Event Organizer 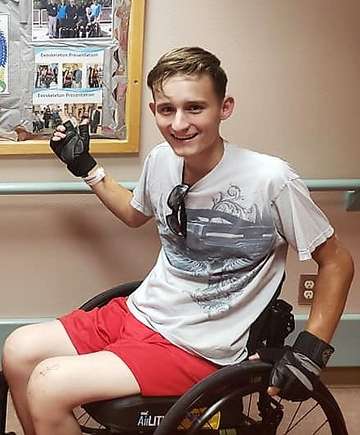