Tickets are $22 in advance $25 Day of show.  There is Meet and Greet available for $50 which included your general admission ticket.  Meet and Greets allow early entrance at 7:00pm with meet and greet with both Bun B and Kirko Bangz starting at 7:30!  Please try and be there before 7:30 to ensure a great experience.

There's no mentioning Texas without bringing up Bun B - one half of the Underground Kingz, an iconic MC who's collaborated with just about every major rapper in the game, and professor at Houston's Rice University. And after over 20 years in the game, Bun is still making classics, as showcased by last year's Trill OG:The Epilogue.   It received 5 Mics in The Source Magainze.

Similarly, you can't think about the new wave of talent coming from the South without throwing Kirko Bangz's name out there. At just 24, Kirko's enjoyed massive success as a rapper-singer off singles "Drank In My Cup" and "What Yo Name Iz?", and was named a XXL Freshman in 2013. It's only fitting, then, that the Houston legend and the budding H-Town MC team up, and that's just what they've decided to do with their upcoming The Trillest Tour.  CYE will be bringing the show to Skully's April 7th for what is sure to be one of the hottest shows of the Spring. 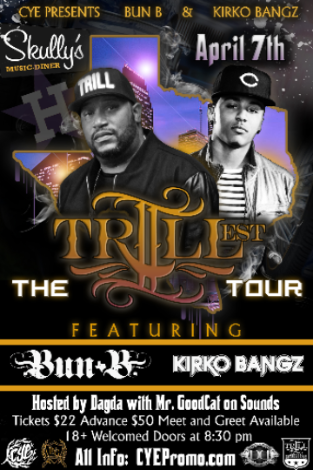