ATOS Organist of the Year MARK HERMAN in Concert

A Salute to the Golden Age of Movie Musicals

From Busby Berkeley to Lerner & Loewe!

Performing music from the great movie musicals of the 1930s, 40s, 50s, and 60s, Mark Herman will perform on the thrilling Barton Theatre Organ once installed at the Indiana Theatre downtown. Bring your friends and family for an entertaining afternoon of great music!

Mark Herman is one of America’s busiest young theatre organists, performing over 30 concerts each year across the US and abroad. In July of 2012, he was named the American Theatre Organist of the Year and is the youngest person ever to receive the prestigious honor.

He studied theatre organ with John Ferguson of Indianapolis, who is recognized worldwide for his skills as a teacher. After graduating with a degree in Theatre Arts/Management from DePaul University in Chicago, Mark relocated to Indianapolis, where he operates his own web design company and represents the Allen Organ Company for Meridian Music. He is also in demand as a voicing specialist and tonal consultant for Allen Organs. 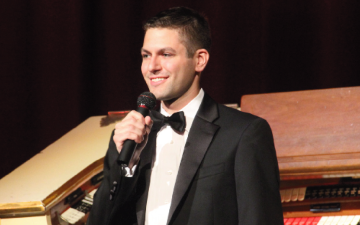