"ENORMITY "this is it", is a movie in search of a purpose, another feature from a director who dares to work under the name Chris Onyeka.  For the first time in the history of Nollywood, the audience will be seeing the hot AMAA awards winner Van Vicker, and the currently sexy Sana Kanu paired together in roles that allow them to bare all by going fully frontal and earning the film best rating from the overly conservative screening.  Sana and Van bring their 'A' game to the set of every movie they've ever made, and this one is no exception.  For the fast-growing legion of Van Vicker and Sana Kanu fans, here's one you probably won't want to miss and should see immediately it hits the theater all over the world and the United States.  Enormity is filled with suspense, love, infidelities, suspicion, disagreements, schemes, and animosities.  It is an absolute homerun for the director Chris Onyeka, who has finally delivered a film that gurantees him an AMAA.  He pushes the envelope even further than any of his earlier films.  The cinematography is awesome, making every frame look like a work of art.  It is breathtaking, fascinating, captivating, interesting, satisfying, dangerous, naughty, sinful entertainment of the best kind.  Prepare to be astonished!  Look out for the Official Trailer. 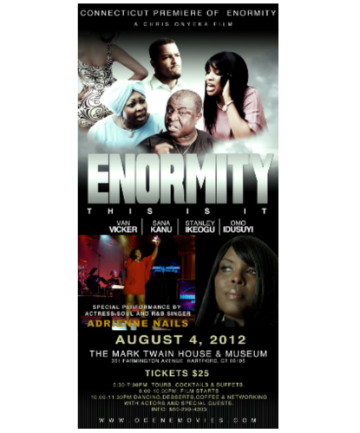