Coolbawn Road Productions and the Hibernian Cultural Centre are very pleased to announce that the legendary Finbar Furey, singer, uillean piper and front man of the iconic Irish band the Furey Brothers and Davey Arthur, will be in concert at the Hibernian Centre, 19 Temple Street, Worcester MA on Thursday, August 27, 2015.  The concert will take place at 8:00 pm. Advance tickets are $20.  Tickets at the door are $25.

He comes from a unique pedigree.  Finbar's father, Ted, began him on the pipes while he was very young. He loved the instrument and spent all his spare time practicing and soaking up knowledge from other pipers who would come to the house for sessions with Ted. It was normal for the likes of Leo Rowsome, Seamus Ennis, John Keenan, Felix Doran, Willie Clancy and Tommy Moore to be around to see Ted at their home in Ballyfermot.

By his teens he had won 3 All Ireland Medals The Oireachtas and many Feisanna - in fact he was the only piper ever to win the All Ireland, the Oirechtas medal and the 4 province titles in the same year. In addition to the pipes he plays tin whistle, banjo and guitar and is a singer, songwriter and composer of tunes.

Performing in six decades, Finbar has a storied professional music career. He started out with his brother Eddie in the 1960s, recording for Transatlantic records. In   the 1970’s he achieved international fame with Eddie, brothers Paul and George, and Scotsman Davey Arthur as lead singer/ frontman of The Furey Brothers and Davey Arthur with whom he recorded some of the most iconic songs in the Irish folk tradition.  Their music was groundbreaking, modern music, with an ancient root.  Music that came from the Irish Gypsy community and when it met the psychedelic era, a new sound was born, music such as When You Were Sweet Sixteen, Steal Away, Leaving Nancy, Tara Hill, Green Fields of France, Red Rose Café, From Clare to Here and The Lonesome Boatman.

Now he works solo, touring extensively and balancing his folk roots with a contemporary sound, bringing his rare talents to a world-wide stage and treating audiences to evenings of pure Irish magic, great music, good humour, and the charm and sparkling wit associated with one of Ireland’s great raconteurs. 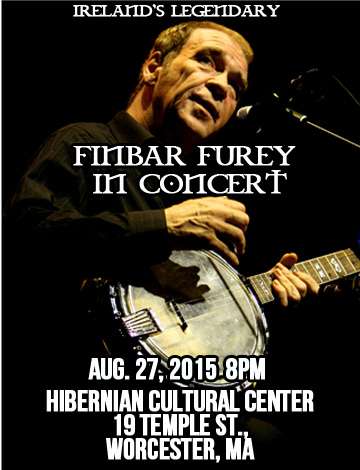