Award-winning violin legend Tim Kliphuis (Holland) teams up with America’s top gypsy jazz guitarist, Alfonso Ponticelli (Chicago) to highlight the music of famed musical duo Stéphane Grappelli and Django Reinhardt. Re-creating the 1930s in Paris, and drawing inspiration from current-day gypsy, classical and folk music as well, they alternate moments of dazzling interplay with melancholy and sheer exhilaration, in an inspired journey that is different every night.

Tim Kliphuis is a master of the violin and a wizard of sound. Using classical, gypsy jazz and folk he has created a unique style that is making waves in concert halls across the globe. His recent successes have led to a Sony Classical recording contract and a performance for the Dutch King and Queen.

Tim has shared the stage with legends Frankie Gavin, Richard Galliano and Les Paul and has been lauded for his musical genius by Nigel Kennedy. He was awarded the Scottish Jazz Award (International), has collaborated with the Richard Strauss Festival, Netherlands and Tallinn Chamber Orchestras, the Cape Town Philharmonic and curates the Fiddles on Fire Festival in Rotterdam, The Netherlands.

Tim Kliphuis is a Pirastro and DPA artist.

Guitarist Alfonso Ponticelli is the driving force of gypsy jazz in the city of Chicago. He has performed with the Illinois Philharmonic Orchestra, played for a crowd of 10,000 at Millennium park on its opening night and is the recipient of the Leonardo da Vinci award for outstanding achievement in performing arts.

His guitar style effortlessly combines gypsy, flamenco (which he studied in Cordoba, Spain with Manolo Sanlucár), traditional American folk (he is also the 1994 National Mountain Dulcimer Champion) and jazz. Alfonso has appeared at the international Django Reinhardt Festival in Samois-sur-Seine, France, the Iridium Jazz Club in New York and a host of gypsy jazz festivals all over the USA, including his own Chicago gypsy jazz fest. 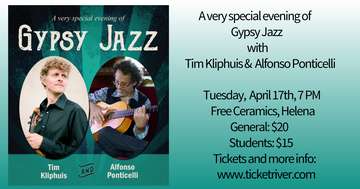