TESSY LOU AND THE SHOTGUN STARS WITH SEAN DEVINE

Montana natives Tessy Lou and The Shotgun Stars return from their new home in Austin, Texas for a very special evening of fine country music with Sean Devine. Tessy Lou, daughter of Kenny and Claudia Williams (Montana Rose) and the band have been tearing up the scene in Texas for over six years now, playing an ever growing list of legendary honky-tonks, nightclubs and summer festivals while releasing two full length albums of original music and several new singles to the Texas radio market. Tessy and the band also appear on three tracks on Sean Devine's latest release, 'Austin Blues', recorded at Cedar Creek in Austin, continuing a long musical relationship for this Montana bunch.

After the release of their second album, 'Somewhere In Texas' Tessy Lou and the Shotgun Stars released a series of singles online. With the expertise of producer Tommy Detamore (Jim Lauderdale, Sunny Sweeney, Jason Allen, Gary P Nunn, Doug Sahm, Kyle Park, Kevin Fowler, Moe Bandy, the Texas Tornadoes and many others), the band was able to record and release several songs, including "Somewhere In Texas", "Wanting To Want Me Too", "Get Out", and "Sticks That Made Thunder", under the 'Texas Sessions' banner.

Tessy Lou has also been working with Nashville producer Luke Wooten (Dierks Bentley, Brad Paisley, Asleep at the Wheel, Joey and Rory, Jim Lauderdale and many others), and hit songwriters including Carl Jackson, Larry Cordle, Ella Mae Bowen, Jerry Salley, Mark McGuinn, Gary P Nunn, and Bobby Boyd, during regular trips to Nashville. The band continues to play wherever the music takes them and has many exciting shows coming up in 2017, including a festival in Norway, shows in Nashville, and a summer tour covering much of the western U.S.

Sean Devine will release 'Live at The Saxon Pub' in January, a collection of songs recorded during a series of performances at the venerable Austin listening room, including appearances with members of The Shotgun Stars. Sean is also currently touting an appearance on “Texas Music Cafe”, a long running live entertainment show on Texas Public Television, and a successful run of shows with fast-rising Nashville singer-songwriter Ward Davis, who refers to Sean as “a Montana treasure.”

Don't miss this special shared billing with Tessy Lou and The Shotgun Stars and Sean Devine at The Attic, 110 N. Main Street (upstairs) in downtown Livingston. 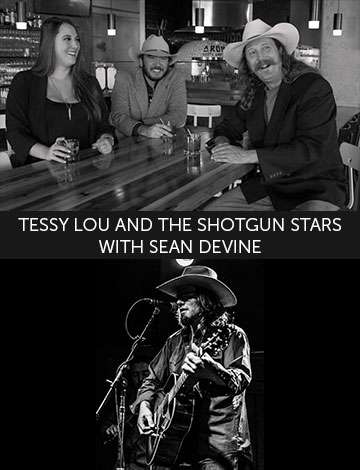