Sponsored by Me Too Chronicles and AMMA Produtions
Tapestries of Hope Documentary and Zoom Q&A - Online wifi
Sep 26, 2020 at 1:00 PM (EDT)
Selected Tickets

Me Too Chronicles and AMMA Productions presents a virtual screening of “Tapestries of Hope” Followed by a live Q&A discussion with award-winning filmmaker and director, Michealene Cristini Risley, Please join us on Saturday, September 26th, beginning at 1:00 pm EST.

IF YOU’VE LOVED A WOMAN, MOTHER, DAUGHTER, SISTER OR FRIEND, YOU MUST SEE THIS FILM!

ABOUT THE FILM
Tapestries of Hope is a powerful film that exposes the ongoing rape of young women in Zimbabwe by men infected with AIDS, and profiles an organization working to protect and empower abused young girls in the country.

It is a common myth promoted by traditional healers in Zimbabwe that a man infected with HIV/AIDS can cure himself by having sex with a virgin. Some victims are very young – even baby girls. Director Michealene Cristini Risley traveled to Zimbabwe to explore the rape and AIDS crisis in the country, to uncover its impact on young girls, and to highlight the work of The Girl Child Network (GCN).

Founded by Zimbabwean human rights activist and child abuse survivor Betty Makoni, GCN rescues and helps heal abused girls. Part of the healing process is speaking out about the crimes committed against them, not an easy task in a country that ostracizes these young female victims. The documentary interweaves the girls’ heart-breaking stories with the true confession of a dying man who raped young women believing it would cure his AIDS.

During filming, Risley and her assistant were arrested and deported by Zimbabwean authorities. Their footage was seized by the Zimbabwean Intelligence Office (C.I.O), though the team managed to later retrieve the footage.

Tapestries of Hope is a portrait of hope and resilience in the face of overwhelming odds, and a vibrant call to action to stop the rape and abuse of women in Zimbabwe, and wherever it may occur around the globe. A Film by Michealene Cristini Risley

Xclusive for attendees only BUNDLE PACKAGE

There’s really no right or wrong way to go about keeping a journal. Visit our website www.MeTooChronicles.org  for a few strategies you can try if you need some ideas to get you going!

SPECIAL THANKS TO OUR SPONSORS 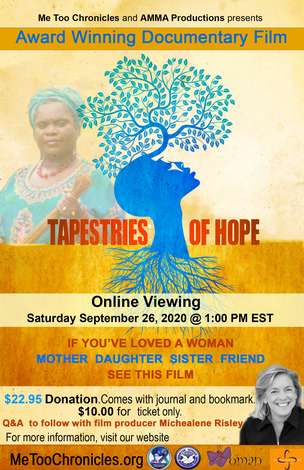 After you purchase tickets you'll get instructions and a link to attend the event online. wifi
© Elk River Systems, Inc. 2020