TICKETS WILL BE AVAILABLE AT THE DOOR!

Mixing hip-hop and R&B Rakim "PnB Rock" Allen got his moniker from Pastorius and Baynton
Streets in the Germantown section of his hometown of Philadelphia. When Rock was 13 years
old, he got sent away to a youth detention program for fighting in school and committing
robberies. When Rock turned 19, he was sent to prison; it was there where he learned to blend
calming melodies with hard street stories. Rock states “At first I would look at R&B artists like
they’re all about love, and soft. Then I saw you could be a street boy and sing and still be hot. I
knew I could do that shit.” He debuted in 2014 with the mixtape RNB (Real Nigga Bangaz), its
title referencing Rock's blend of R&B and rap. The RNB2 mixtape appeared early in 2015 and
caught the attention of Atlantic Records. The Warner-affiliated label signed Rock and released
RNB3 that same year, along with his single "Jealous" featuring Fetty Wap. The two released a
mixtape, Money, Hoes & Flows, in 2016. Throughout the year, Rock made a multitude of guest
appearances on tracks by Kodak Black, YFN Lucci, Kevin Hart, and others. His proper debut
album, GTTM: Goin Thru the Motions, was released by Atlantic in early 2017. Wiz Khalifa, Ty
Dolla $ign, and A Boogie wit da Hoodie all made guest appearances. The release was a
success, hitting the Top 30 of the Billboard 200 album chart.

All sales are final. Tickets are available on sale at the Farrell Information Desk from 11:00am-Midnight Monday-Friday, 3:00pm-Midnight Saturday and Sunday. 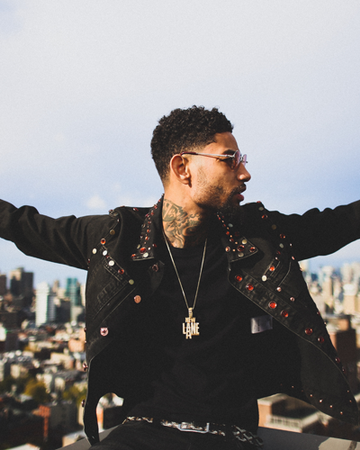