Rubix Kube in Concert to Benefit the Madison Bark Park

Madison Beach and Recreation presents Rubix Kube, "The Galaxy's Most Original 80's Tribute Band" on September 7, 2018.  RUBIX KUBE has taken the universe by storm as the most excellent ‘80s tribute band of all time! Its one-of-a-kind “THE EIGHTIES STRIKE BACK Show” is performed in their NYC headquarters, across the planet, and to galaxies far . . far away. The KUBE is more than just a cover band - it's a totally awesome, true '80s Experience. Every super-charged show takes it to the max and guarantees to set the roof on fire and burn down the house. (Metaphorically speaking of course.) RUBIX KUBE is led by a male and female dynamic duo of karma chameleons, able to transform in the-blink-of-an-eye into the voice and character of any '80s icon. It's like Madonna, Michael Jackson, Cher, Prince, Devo, Bon Jovi, Guns N’ Roses, and more are teleported right before your eyes on the same stage, in one concert! Their supporting sidekicks are some of the most awesome and versatile musicians around, including guitarist Steve Brown of the million-selling Rock band TRIXTER. All are decked out in vibrant, vintage '80s threads and with enough hairspray to take down Freddy Krueger, The Terminator, Beetlejuice, and all The Gremlins at once. The KUBE is able to crank out Pop, Rock, New Wave, Dance and Hair Metal hits from the decade of decadence, and perform them just like the originals - yet with their own gnarly twist. Talkshow host Kelly Ripa has praised RUBIX KUBE as "Amazing. You definitely have to check it out, it's so much fun. It's like going back to The Eighties!" RUBIX KUBE has shared the stage with actual '80s rockstars & legends including: Rick Springfield, Tiffany, Debbie Gibson, Bret Michaels / Poison, Dee Snider / Twisted Sister, MC Hammer, Night Ranger, Mike Score / A Flock Of Seagulls, Colin Hay / Men At Work, Taylor Dayne, Bonnie Tyler, Eric Martin / Mr. Big, and Tone Loc. RUBIX KUBE has had featured TV segments & interviews on The TODAY Show, FUSE, FOX News, Bethenny and parts on hit reality TV shows "Cake Boss" and "Dirty Money". The ever-expanding list of celebrity fan attendees include: Kelly Ripa, Katie Couric, Lance Bass, & Chris Kirkpatrick (of N 'Sync), Boomer Esiason, Mark Sanchez, Miley Cyrus, and Ivanka Trump. Prepare for the most bodacious, totally rad and ultimate time-warp at “THE EIGHTIES STRIKE BACK Show" starring RUBIX KUBE!! For moreThey will be performing all your favorite 80's songs at the Polson Auditorium. Check them out Rubixkube.com.

Dress in your favorite 80's fashion and perhaps you will win a prize for the best 80's outfit. Net proceeds will benefit the Madison Bark Park.  This is a family friendly event. Come to sing and dance and relive the 80's. All tickets are general seating.
Contact Event Organizer 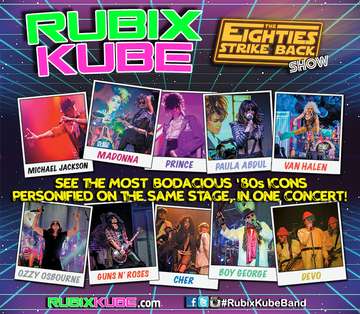