Roberto was born in Verona, Italy and started playing the guitar at an early age. At the age of 15 he discovered his greatest passion to be THE BLUES.

After several years of activity in the Italian music scene, he was asked to play in the ‘Tao Ravao Blues Band’ in 1987, with whom he recorded his first album: “From Madagascar To Chicago”.

In December 1989 he joined "Rudy’s Blues Band" and with them recorded his second album: “Reason To Live”. With this band, he also played at the biggest European festivals such as: Amsterdam Blues Festival, New Orleans Music Festival in Ascona, Sanremo Blues Festival, etc.

Roberto performed at the historical places of the Blues in the USA such as “Antone’s” in Austin, Texas where he shared the stage with artists like “Anson Funderburgh” and “Sue Folley”.

In 1991 he finally set up his own band MORBLUS which has brought him much recognition and many awards, playing in all the biggest national and international blues festivals and events. In 1998 he toured with MORBLUS around the USA where he played at the B.B. King’s Bluesclub in Memphis and in most popular American Blues clubs. Roberto writes and arranges the music and lyrics of all the original songs recorded by MORBLUS published on various CDs

Roberto’s personality and unique playing style are evident in all his interpretations while at the same time recalling the styles of blues greats such as Freddy King, Albert King, B.B. King, Albert Collins, T. Bone Walker, Steve Ray Vaughan and Eric Clapton.

Roberto is a passionate and commanding guitarist, demonstrating great groove in every song he plays. Each note comes straight from his heart. As a singer, Roberto’s powerful voice recalls the styles and tones of Sam Cook, O.V. Wright, Little Milton, Otis Redding, Robert Cray, and Donny Hathaway.

“Rob is one of the most technically gifted, soulful and incendiary guitar players on the US and European blues circuits.” “The blues flows so naturally for Roberto Morbioli, and his guitar playing and vocals are so polished, he sounds as if he grew up closer to Chicago than Verona, Italy." Boston Herald “While Morbioli unleashes his hellhounds in front of the stage, you hear all kinds of funk, soul, shuffle, swamp, second line and everything that’s an unabashed, relentless feast for the ears, and other senses." Antoine Légat (Banana Peel) “Every note is coming straight from the heart. And it’s so infectious that you’re caught up in it before you realize what’s happening.” Roberto Morbioli – exceptional guitar and bass player, singer, songwriter, and for more than 25 years the charismatic frontman of the Europe-wide renowned Band MORBLUS – reinvents himself! With a new sound, a new trio formation and new name , 'ROB MO' which he has already used in the USA for a longer time, the Veronese virtuoso opens up a new chapter of his career. Consequently, the new CD released in Febrary 2018 is called “From Scratch”, the twelfth album in his discography. After many years of “Blues, Funk, Soul“(electric & acoustic) and projects with famous artists such as Guitar Shorty, Jesse Yawn, Lucky Peterson, Paul Orta, John Mayall, Roomful of Blues & Big Daddy Wilson, Roberto focuses on rougher, rawer notes and recollected the reduced and cleaner sound of his trio (guitar/bass/drums), according to his motto „A good cook doesn’t need many ingredients for an extraordinary meal – only the right ones!” Everything different, everything new? Not completely! What remains is the established mixture of slow and up-tempo songs, loud and silent notes inspired by various musicals genres. And of course the obligatory walk through the audience during his LIVE concerts when Roberto electrifies the listeners with his flirty guitar and invites them to a trip into his world. 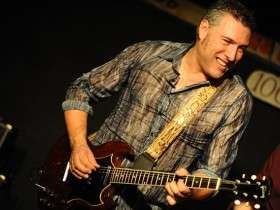