Up All Night. It’s an apt title for Albert Castiglia’s seventh album: nobody sleeps when this man is in town. After 27 years of house-rocking studio albums and smack-in-the-mouth live shows, the Florida bandleader is the acknowledged master of red-raw, sweat-and-hair blues that gives it to you straight. Now, the visceral riffs and
bruised soul of Up All Night make everything else sound like a lullaby. “I’d describe the musical vibe of this new album,” says Castiglia simply, “as heavy.”
This isn’t Castiglia’s first time around. Born on August 12th, 1969, in New York – before moving to Florida aged five – he made his professional debut in 1990 with Miami Blues Authority, but truly hit the international radar when Junior Wells invited him into his solo band for several world tours. “It was an incredible adventure,” recalls Castiglia. “Ever since I was a kid, I wanted to be a Chicago bluesman. Junior opened the door for me to do that. 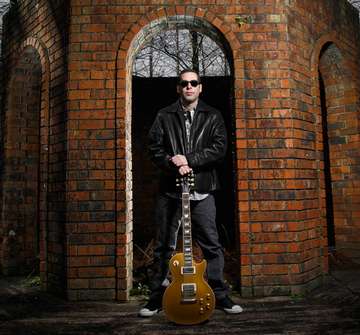