> Events in New York > My Mothers Italian, My Fathers Jewish, and I am STILL IN THERAPY

My Mothers Italian, My Fathers Jewish, and I am STILL IN THERAPY

Still in Therapy! The next session of laughs

In this hysterical prequel, we go back with Steve from his baby years with his twin sister right up to the present. We’ll meet: Uncle Willie, Stuttering Cousin Bob, Demented Cousin Kenny, Steve’s new therapist, Cousin Sal (and Sal’s parole officer) and a myriad of astounding characters we know, love and tolerate from our own  families; each one brought to life on stage by Steve using his gift for creating voices dialects and wacky sound effects that only add to the hilarity of each story.                    STILL IN THERAPY is his next hilarious  installment in his quest to defend himself against those people whose sole purpose in life is to add chaos to his. Steve Solomon’s two-time award   winning show has met with rave reviews and great audience acclaim throughout the country, becoming one of the longest-running one-man shows in Broadway history. You will LOVE this show as much as the original. 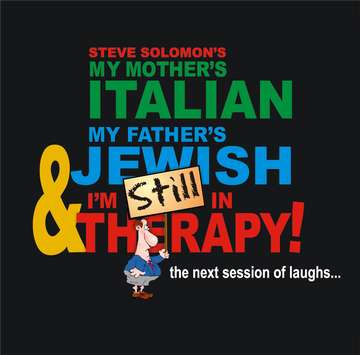