Kings and Queen of Motown

The Temptations vs The Whispers tribute

What:             The Kings & Queen of Motown is a premier tribute show featuring tributes to The Temptations, The Whispers, The Ojays, The Stylistics, The Delfonics, Aretha Franklin, Patti Labelle, Chaka Kahn, Smokey Robinson, Marvin Gaye, Sam Cooke, Teddy Pendergrass and more. This magnificent show will thrill visitors of all ages. Over 50 years of memorable music from the significant classic soul hits of Motown to the soothing riffs of B. B. King this show blends action packed and memorable moments of non-stop music for you to enjoy.

Hollywood actor and blues guitarist Jamell Richardson who played Jimmy Nolan in the James Brown movie “Get on Up” will close out the event. Their will also be a special award recognition for Hollywood actor Oneal Compton originally from Sumter SC who had roles in prominent films and television (Life, Nixon, Nell, Primary Colors, Deep Impact, Seinfeld, Diaboloque) He is also an award-winning writer, producer, photographer and director of television commercials.

Also featuring The Sandhill Soul Crooners and Making a Difference both groups will face off as The Whispers versus The Temptations with syncopated steps and moves. 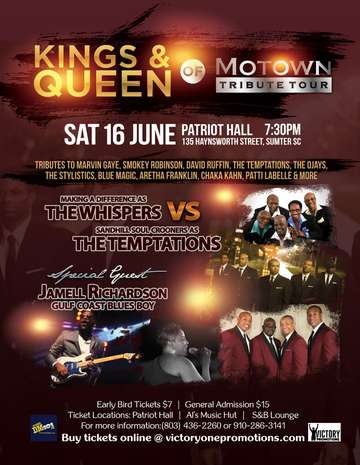