Jalan Crossland is an award winning picker of guitar and banjo (National Fingerstyle Champion 1997, Wyoming Flatpick Champion 1999) and was awarded the Governor's Arts award in 2013. He was portrayed in the short film 'Wyomericana', which won the Laramie Film Festival in 2014. His 2017 release 'Singalongs For The Apocalypse' was voted Album of the Year at Wyoming Public Radio.

“He casts a sardonic but affectionate eye on the roughhewn lives of Western people. Crossland’s ‘Big Horn Mountain Blues’ is so popular in Wyoming that it is practically the official state song.” (Michael Segell- New York Times).

“To pin any one label on Crossland’s body of work would be a crime. It’s not country. It’s not rock. It sure as hell ain’t your daddy’s bluegrass! His characters and stories come alive to form an often dark, yet highly humorous interpretation of the American Experience.” (Marcus Huff- Laramie Zine)

He’s been invited as the opening act on two national tours with Texas songwriting legend Robert Earl Keen, has released 7 albums of primarily his own songs, and performs throughout the U.S. and occasionally Europe, when he takes the notion.

Sean Devine has been on a good roll since the 2015 release of 'Austin Blues', his critically well received album recorded live to tape at Cedar Creek in Austin, Texas. His fourth all original release, the collection of soul searching songs earned Sean a place among new country's rising stars.

"Sounds like a wonderful mix of Robert Earl Keen and Bob Dylan. It has a little country, folk, and rock and roll. This guy knows how to write and craft a beautiful song." Harry Kaplan - Twangrila

"Country to its core... Devine lays himself before the listener as he tells his story of heartbreak and loneliness. Rachel Hergett - Bozeman Daily Chronicle

"I hope everyone else feels half as good as me, about Sean Devine's Austin Blues." - Rik James - KGLT-FM 91.9

"Sean Devine is the Bob Dylan of Montana" - Ward Davis

Sean has since shared stages with a host of new and traditional country artists including Ward Davis, Stoney LaRue, Jason Eady, Sunny Sweeney, Micky and The Motorcars, Martha Scanlan, and The Jayhawks.

Sean is currently preparing a new release, 'Sean Devine Live at The Saxon Pub', gleaned from a string of shows recorded at the venerable South Austin nightclub, and will then begin his next studio album
Contact Event Organizer 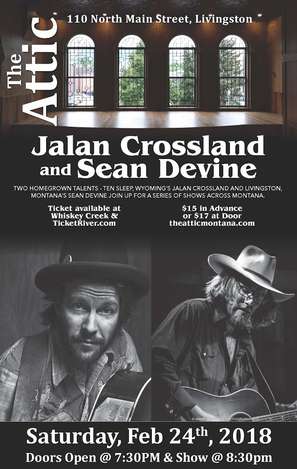