Killer Beaz is the Funniest Valentine that you can give this year in the Tri-Cities area, Thursday, February 14, 2019.  The Johnson City Holiday Inn Conference Center will play host for this “Funny Valentine Extravaganza” featuring dinner and show packages, along with room packages.   Tickets are available at killerbeaz.com, and The Holiday Inn for all packages.  It will be a fun evening, beginning with dinner available starting at 5PM, and the show starting in the ballroom at 7PM.  (VIP Seating and Meet & Greet Package includes, meet & greet at 6:15, VIP Limited Premium Seating ticket to show, Lanyard and a Killer Beaz T-shirt- sizes Medium through 2XL.)

Killer Beaz is currently guest starring in his third season of the Discovery Channel’s hit series, “Moonshiners”,  touring the country, performing on the high seas, and about to release an upcoming video series of clean comedy, “Killer Beaz PRESENTS” featuring the stand up of Beaz and outstanding comics handpicked from all over the country.  With many thousands of radio, television and stage appearances, Beaz has been entertaining audiences for over three decades.  He is an award winning artist, and has been signed with both Sony and Warner Brothers Records, and received reviews such as:

Killer Beaz has his own, unique brand of hard hitting, "Laugh out Loud" – “Laugh A Lot” comedy.  When asked, Beaz says about his shows, “I love the art of stand-up comedy, the performance, the snorts, the convulsive laughter in unison, and seeing the room absolutely erupt in laughter and fun, it’s fun to me, and I have a ball at my shows!”   I enjoy having an effect on the room, making people belly laugh with tears rolling down their face, and then seeing joyous anticipation as audience members can’t wait to hear what is next!  There is such delight in that!  I love my job!”

Beaz delivers a high-energy, edgy, and “everyman” style humor that appeals to any audience.  See him on television, hear him on the radio, see his stage performance live...you'll be "Stung for Life!"  Tickets are available at killerbeaz.com and dinner, show, and room packages are available at the Johnson City Holiday Inn Conference Center, call 423-283-0074 for more information.

Tickets are GENERAL ADMISSION unless VIP SEATING  -  VIP MEET & GREET is at 6:15PM
NO REFUNDS 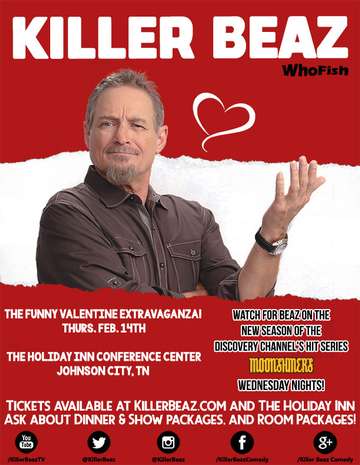