> Events in Montana > Dammed to Extinction

Produced by TEDxBigSky speakers Michael Peterson & Steven Hawley, Damned to Extinction is an award-winning documentary chronicling the trials and tribulations of a Pacific Ocean orca pod whose existence is threatened by a dwindling Chinook salmon population as a result of damming the Snake River.
For eons, a one-of-a-kind population of killer whales has hunted Chinook salmon along the Pacific Coast of the United States. For the last 40 years, renowned whale scientist Ken Balcomb has closely observed them. He’s familiar with a deadly pattern - as salmon numbers plummet, the orcas starve. Studying whales is science, removing dams is politics but will also save salmon, orcas and money. 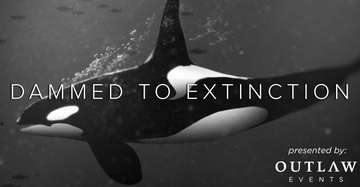