Killer Beaz is currently shining in his fourth season of the Discovery Channel’s hit series, “Moonshiners”, touring the country, and performing on the high seas.  He has just released his new DVD and Download Video, "There's That!", and is about to release an upcoming video series of clean comedy, “Killer Beaz PRESENTS” featuring the standup of Beaz and outstanding comics handpicked from all over the country.  Killer Beaz will be performing at Cedar Street Social Club, Saturday, March 28, 2020.  Tickets are available through KillerBeaz.com.

With many thousands of radio, television and stage appearances, Beaz has been entertaining audiences for over three decades.  He is an award winning artist, and has been signed with both Sony and Warner Brothers Records, and received reviews such as:

Killer Beaz has his own, unique brand of “Hard Hitting” – "Laugh out Loud" – “Laugh A Lot” – “HI-PROOF” –  “High Energy” –  “Everyman” style humor that appeals to any audience.  When asked, Beaz says about his shows, “I love the art of stand-up comedy, the performance, seeing the room absolutely erupt in laughter and fun, it’s fun to me, and I enjoy having an effect on the room, and making people belly laugh with tears rolling down their face.  There is such delight in that!  I love my job! I have a ball at my shows!”

See him on television, hear him on the radio, see his stage performance live...you'll be "Stung for Life!"   The show is Saturday, March 28 at 7:00PM at Cedar Street Social Club in downtown Mobile.  Tickets and info are available at killerbeaz.com KillerBeaz.com. 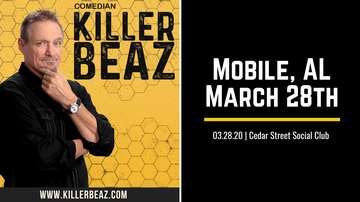