Chromatica presents From Russia . . . . With Music!

David Huff, Artistic Director and Conductor, has announced that Chromatica will be performing a range of choral masterpieces including classic compositions such as "Priidite, Poklonimsya (O Come Let us Worship)" from All Night Vigil by Rachmaninoff to jazz standards "Love Walked In" by George and Ira Gershwin and "Let's Face the Music and Dance" by Irving Berlin.

We will also be featuring compositions by the Russian composers known as "The Mighty Handful." Also known as "The Five" and the "New Russian School", these were five prominent 19th-century Russian composers who worked together to create distinct Russian classical music. Mily Balakirev (the leader), César Cui, Modest Mussorgsky, Nikolai Rimsky-Korsakov and Alexander Borodin all lived in Saint Petersburg, and collaborated from 1856 to 1870. 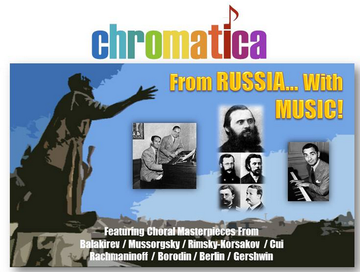