We could not think of a better venue to begin our fundraising campaign for the film Casta Diva: The Marian Anderson Story, than in the elegant Delegate’s Dining Room at the United Nations. The great opera singer and humanitarian, Marian Anderson served as a Delegate to the United Nations Human Rights Committee for several years as a “Goodwill Ambassadress”. The breath-taking views of the East River, including Roosevelt Island with its new Four Freedoms Park, and the Long Island City waterfront, will serve as a stunning backdrop for our classical recital dedicated to the legacy of Mrs. Anderson.

This recital aligns itself with the overall mission of Mrs. Anderson. To make classical music accessible to everyone despite, age, race or socio-economic background.

Ms. Cooper pursued her music education and received her B.M. in Opera Performance from East Carolina University, where she was named Outstanding College Students of America. In  2013, she was awarded Distinguished Alumni of the Year from the School of Music. She also studied music at the American Institute of Musical Studies in Graz, Austria. Bridgette is often called upon to perform as guest soloist for International Dignitaries such as the former first lady Michelle Obama, His Excellency, Dr. Eugene Newry, Consulate General Paulette Zonicle, His Excellency Brigadier General Anthony Phillips-Spencer, and His Excellency, Dr. Elliston Rahming, Ambassador and Permanent Representative of The Bahamas to the United Nations.  She is the first classical singer to be featured in Scholar Magazine and ABC Here and Now. Ms. Cooper is also featured in the global periodical, Black Enterprise Magazine along with interviews in several other international publications. Bri's experience as a performer in the field of classical music has also made her a highly sought after guest contributor to several on line magazines about classical music. She is the recipient of several international awards of singing including The Paul Robeson Vocal Award. Her performing experience includes recital and opera performances in the United States, Europe, Israel and Canada. Bri is the Producer and Host of Operaluscious "Where Opera Meets Lifestyle", which educates, inspires, and entertains viewers about all things opera and how they can incorporate opera into their daily lives. Ms. Cooper's recent performances include the Independence Day Celebration of the Bahamas where she was also invited to host the country's national TV program that highlighted the elegant and festive event, which celebrates her Bahamian heritage.

Jeffrey Chappell has performed throughout the United States and in Europe, Asia, and Latin America. He has appeared in recitals, in chamber music, and as concerto soloist with major symphony orchestras including those of Philadelphia, St. Lois, Pittsburgh, Houston, Indianapolis, and Oakland, and over forty times with the Baltimore Symphony Orchestra including concerts at Carnegie Hall and Wolf Trap Park. He was a scholarship student of Leon Fleisher at the Peabody Conservatory and of Rudolf Serkin and Eleanor Sokoloff at the Curtis Institute.

The classical recital event will be held in the historical Delegates Dining Room at the United Nations, which also coincides with the Commission of the Status of Women meeting. Proceeds will benefit From the Heart Productions a 501-c3 organization fiscal sponsor of 728 Productions. 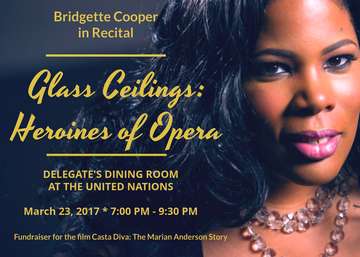