PERFORMANCE LOCATION
The Franklinton Playhouse
566 W. Rich St.
Columbus, OH 43215
Parking is available in the lot across the street from the theatre and on the street.

ABOUT THE SHOW
A.J. kicked British butt, shafted the Indians and smacked down the Spaniards, all in the name of these United States – who cares if he didn't have permission? Bloody Bloody Andrew Jackson creators, Michael Friedman (Love's Labour's Lost, The Fortress of Solitude) and Alex Timbers (Love's Labour's Lost, Peter and the Starcatcher), cook up an alternate universe (and draw parallels to today's political/populist landscape) with their musical about the seventh U.S. president.

Bloody Bloody Andrew Jackson follows America's seventh president from his early days as a child on the wild frontier to his controversial reign in the White House. With the country divided into rich and poor (and with continued skirmishes with the Native Americans upsetting pieces of the new world), Jackson begins his steady climb from military strategist to populist rabble-rouser to President of the United States. Along the way, he meets his wife, Rachel, takes on the Founding Fathers – and rocks like no political figure has ever rocked before, with the help of an onstage trio and an entourage of singing, joking cohorts. It also asks the question: is wanting to have a beer with someone reason enough to elect him? What if he's really, really hot?

With a raucous blend of outrageous comedy, anarchic theatricality and an infectious rock score, this wildly entertaining 90-minute show is the perfect night at the theatre. 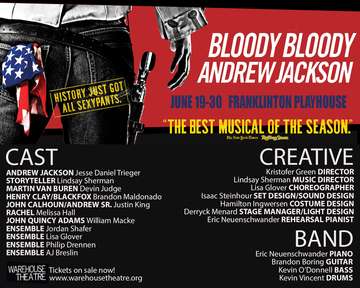