An Evening with Paul Taylor

Paul Taylor has been a groundbreaking force among the sax elite in the genre since his hit 1995 debut On The Horn, his 2014 #1 hit “Supernova” continued the exhilarating upswing he has been enjoying since he started his second decade as an artist with Ladies’ Choice (2007) – his first ever #1 on the Billboard Contemporary Jazz Albums Chart. “Burnin’,” the title track from his 2009 album, hit #1 on the airplay charts, and “Push To Start” from Prime Time (2011), hit the pole position on the Smooth Jazz Songs chart. Prime Time further lived up to its colorful name by reaching the Top Ten on the Billboard Jazz Albums chart.

The Denver native has been mesmerizing thousands of fans, headlining hundreds of shows and being part of exciting all-star tours – most recently doing dates with Peter White and Euge Groove in a lineup affectionately dubbed “Peter, Paul and Euge.” Before that he was part of the blockbuster summer tours Gentlemen of the Night (with Marion Meadows and Warren Hill) and Sax and the City (with Meadows and Vincent Ingala). Over the years, he has also hit the road with The Rippingtons and the acclaimed “Groovin’ For Grover” tour.

In December 2012, the longtime basketball enthusiast achieved another longtime dream, performing the National Anthem in Madison Square Garden at a New York Knicks game; their coach Mike Woodson is a longtime fan. Taylor is now also an official endorsee of Vigilante mouthpieces and tenor and alto for Cannonball Musical Instruments.

After over ten albums of non-stop hit making, thousands of charismatic performances worldwide and years of setting new standards for the sonic possibilities of contemporary urban jazz, Paul Taylor’s still got his antenna up – ready to pounce on, absorb and be inspired by every vibe he hears that’s fresh, hip and edgy. Now, with Countdown, he’s blasting off into the next phase of his career, excited about the road ahead! 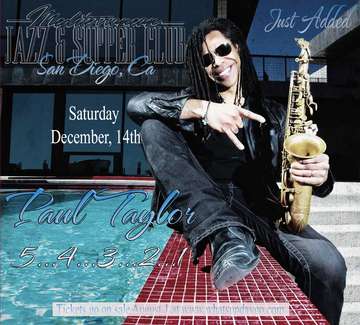