In the final scene of Henrik Ibsen's A Doll's House, Nora Helmer makes the shocking decision to leave her husband and children and begin a life on her own. This climactic event—when Nora slams the door on everything in her life—instantly propelled world drama into the modern age. In A Doll's House, Part 2, many years have passed since Nora’s exit. Now there’s a knock on that same door. Nora has returned. But why? And what will it mean for those she left behind? Kari Doll directs Kevin Asselin, Lauren Eva Lane, Rhonda Smith, and Cara Wilder in Bozeman Actors Theatre's production of the play that took Broadway by storm in 2017 on its way to eight Tony Award nominations. TICKETS ARE ONLY AVAILABLE ONLINE, IN ADVANCE.
Contact Event Organizer 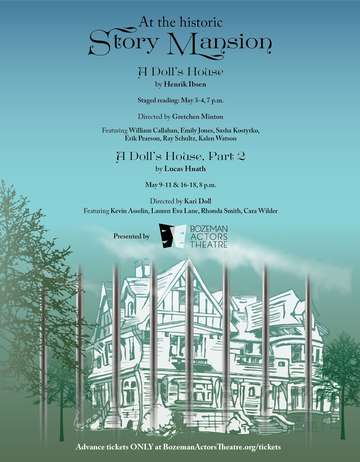