A Crossroads Dance with Michael Tubridy

ANNAPOLIS, MARYLAND — Waveland Farm, a.k.a. BRICELAND —Yes, we are having a REAL crossroads dance with a dancing deck! And who's going to be there? THE GREAT MAN, HIMSELF, Michael Tubridy, flute player, dancing master, and epic storyteller. Yes, this is really happening!Michael will teach an old-style step workshop from 1 to 2:00pm; then he'll teach Old Philadelphia Set from 3 to 4:00pm; then we'll have a cookout and a concert from Michael, and a raging conflagration (a.k.a. bonfire: bring your heretics) overlooking the scenic Severn River.

WHAT NOT TO BRING:  Grievances.

WHAT IS WAVELAND FARM?

Going back to the 17th century, the Brices of Annapolis maintained three farms outside of Annapolis: Linwood, Pendenny, and Waveland. Waveland Farm along the Severn River was the place for growing watermelons, cantaloupes, raspberries, wineberries, and blackberries. It was also the site of the ferry to Annapolis (near where the Naval Academy Bridge spans the Severn, now), and provided the building sites for Manresa and Pendennis Mount West. Today, the farm having lain fallow for almost a century, it is a deciduous forest and brackish marsh, and a preserve for white-tailed deer, red foxes, beavers, muskrats, raccoons, bald eagles, ospreys, and many song-bird species. One of the last pristine woodlands on the Severn River, Waveland Farm is a secret idyll with authentic Asian bamboo from Asia, lovely red earth, dirt roads, and a beautiful vista overlooking the Severn River.

WHAT IS A CROSSROADS DANCE?

The crossroads dance was a social event popular in Ireland up to the mid-20th century in which people would congregate at the large cleared space of a crossroads for dancing and merriment, usually on a Sunday. In contrast to the later ceili dances, crossroads dances were occasions for the smaller, square set dances popular in the early 19th century, and featured solo dancing, sometimes with instruction from a traveling dancing master.

Importantly, the crossroads dance was an opportunity to socialize (and match-make) with people from other towns. Large gatherings sometimes gave rise to sport between local dancers or dancing masters, with the spectators calling out, "Hurroo for Nancy" or "Hurroo for Tom", for a favorite dancer to take the floor, often with a partner. Usually, a fresh dancer (or his supporters) would then pay the musician for a favorite tune, and the dancing would continue until all the couples had taken their turn. In this way, lively competition resulted not only in camaraderie, but also opportunities for young men to dance with young women. Along with patterns ("Patroons"), fairs, house dances, and balls, the crossroads dance was a pillar of social life and rural entertainment in 19th century Ireland. It declined in popularity in the mid-20th century, due to rural depopulation, musical recordings, and pressure from the Catholic clergy. The latter resulted in the Public Dance Halls Act of 1935, which restricted all dancing to licensed establishments.

Michael Tubridy is a flute player and dancing master from Kilrush, Co. Clare, and a former member of Sean O'Riada's Ceoltóirí Chualann and The Chieftains. While studying at UCD in the 1950s, Michael began to attend the Thomas Street Pipers’ Club, where he met Paddy Moloney and Sean Potts, and they established strong musical connections, performing together in concerts, sessions, and making a number of radio programs together. Along with Paddy, Seán Potts, and Martin Fay, he was one of the founding members of The Chieftains in 1962, and recorded on many of the group's early albums. Michael ceased touring with the Chieftains in 1979 to go back to work as an structural engineer. He has continued to be associated with traditional music through teaching at traditional music festivals, and has visited the United States frequently for the past four years, teaching old-style steps and set dances he learned from the late dancing master Dan Furey of Labasheeda, Co. Clare. A living legend in traditional music, Michael is best known for playing the flute in a deeply compelling, traditional style.?? 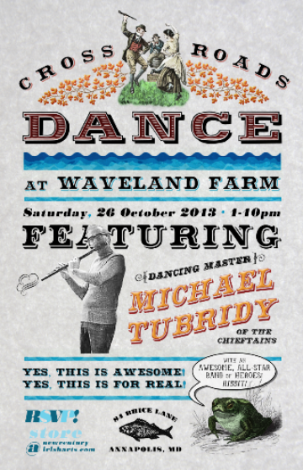