> Events in New York > "Battle of The Royals"

"Battle of The Royals"

The first official Fitness And Dance (FAD) Party. Bringing the worlds of Fitness and Dance together! There is no better way to start the summer than with a party celebrating the music of two musical icons. PRINCE (His Royal Badness) -VS- MICHAEL JACKSON (The King of Pop). If you have ever heard either of these icons music in a club, then you know how magical it is!!!This party will feature only music from these two legends! From the "D-Fit Fuzion Class" featuring these instructors I personally chose to be the starting line up for the first official FAD Party!!

To the dance performances soon to be announced! We also have a live DJ spinning the legendary tunes. Besides the class and the performances you will have plenty of time to just dance and enjoy the music!!! We have a few more surprises in store so stay tuned. Even if you don't want to take part in the fitness aspect you can still come to party and dance!!!

We will have door prizes, raffles and gifts and all of this for only

Come be a part of history, this will be epic!! 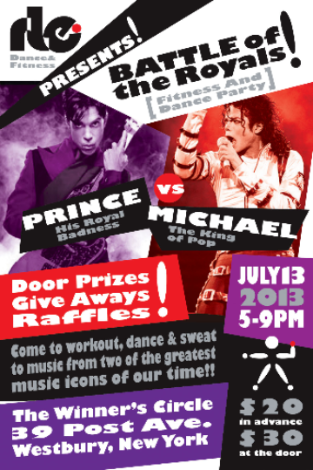