> Events in Indiana > Brett Valliant - Who needs an orchestra?

Brett Valliant - Who needs an orchestra?

Accomplished Kansas-based theatre organist Brett Valliant will perform a solo show titled, “Who needs an orchestra?”, in which he will demonstrate a wide variety of music that is well-suited to the theatre pipe organ, often referred to as the “unit orchestra,” featuring such works as “Bohemian Rhapsody,” “Overture” to The Thieving Magpie, and music from Les Miserables. The show will take place on Sunday, June 9, 2013 at 2:30pm at Warren Performing Arts Center, home of the Dessa and Virginia Byrd Memorial Barton Theatre Pipe Organ originally installed in the Indiana Theatre downtown.

Tickets are $12 presale, $15 at the door. Student tickets are FREE at the door. Visit www.cicatos.org to order tickets, or call (317) 255-8056. The concert will take place at Warren Performing Arts Center, located at 9500 E. 16th St., Indianapolis, part of the Warren Central High School Complex. Free parking.

Brett Valliant is an American organist in demand for his ability to perform many different genres of music on the instrument he loves. Whether at an organ in a concert hall, a majestic church organ on Sunday morning, a mighty Wurlitzer in a theatre, or a Hammond B-3, Brett is right at home. Critics internationally have defined his performances as “exciting,” refreshing, “unorthodox, and astonishing.”

Brett was inspired by the organ at church when he was just three years old. He soon excelled at the piano, but that early love of the pipe organ propelled him to his position as a full time church musician at the First United Methodist Church of Wichita, Kansas, a post he has held since his teen years. While at the church he plays a large and unique Schantz pipe organ and oversees a music department seen by thousands across the Midwest on the church's television programs. Brett studied organ at Wichita State University, and he has been a featured performer on National Public Radio's Pipe Dreams as well as the National Bible Broadcasting Network where his imaginative hymn arrangements are heard daily throughout the United States.

At fifteen, he played his first Wurlitzer and exhibited a natural talent for the popular music loved by fans of theatre organ. In the world of silent film, Brett is known for scoring and accompanying many films but is best known for dramatic films such as King Of Kings, Phantom Of The Opera, The Ten Commandments, Broken Blossoms, Wings, and The Eagle. He plays annually for several film festivals including the International Film Festival hosted by the American Film Institute, and has been a featured performer at national conventions of the American Guild of Organists and the American Theatre Organ Society. He has toured extensively as a solo artist, featured soloist with orchestras, and film accompanist abroad and throughout the United States.

Brett has three solo recordings to his credit as well as a number of studio projects with other musicians. For his innovative approach to musicianship and performance, Brett credits his love and passion for rock 'n' roll, classical, jazz, and popular music. He resides in Wichita with his tiny Chihuahua, Mabel. 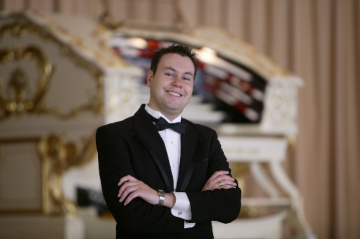