The CARD Foundation is excited to announce its third annual fundraising concert to benefit the Center for Asbestos Related Disease (CARD).  The line-up this year has expanded from past years, featuring not two but three bands. The Internationally known rock and roll super group, Night Ranger, will headline this year’s event, along with Kip Winger and Copper Mountain Band. All three groups will be performing in Libby on Saturday, July 13, 2013, at 8pm at J Neils Park.

With over 30 years in the business, and more than 17 million albums sold worldwide, Night Ranger has proven they can still “Rock in America”.Formed in the San Francisco Bay area in the early 1980’s, Night Ranger both epitomized and transcended the sound and style of that decade. In 1983, Night Ranger earned widespread acclaim with their multi-platinum album Midnight Madness, which included their smash hits "Sister Christian," "When You Close Your Eyes", and the anthemic "(You Can Still) Rock In America.”

Over the years, the band’s music has made notable contributions to and been featured in many different areas of media and popular culture. Night Ranger’s songs can be heard in the Rock Band and Guitar Hero video games; Rock of Ages hit Broadway musical and film; the Oscar-nominated film Boogie Nights; FOX’s hit TV Shows American Dad, and Glee; JBL’s “Hear The Truth” campaign; and many more! The band also made a special guest appearance on ABC’s hit reality TV show, Bachelor Pad.

Night Ranger, in celebration of their 30th Anniversary, continues their non-stop touring, playing to sold-out crowds around the world, including stops in Europe, Mexico, Canada, Japan and the United States.

Kip Winger, is a multi-platinum recording artist, who is known for his success with Winger and his early days as a bass player with Alice Cooper. However the range and scope of his musical journey can be more fully experienced in his solo albums, This Conversation Seems Like A Dream, Songs From The Ocean Floor, From The Moon To The Sun and his most recent composition Ghosts for string orchestra, piano and harp.

Aside from his powerful solo acoustic shows and touring with Winger, Kip was the lead singer for the Alan Parsons Live Project. He has performed or recorded with the likes of Alice Cooper, Mark Farner, Roger Daltrey, Neal Schon and Bob Dylan. Kip may be best recognized for his work with Winger, with hit songs including “Seventeen”, “Headed for a Heartbreak”, and “Miles Away”.

A local favorite, Copper Mountain Band is a high-energy, mainstream, country music group with family roots that lie deep in the history of Montana. Israel and Nate are cousins that were raised on a homestead on Copper Mountain, which is located in Troy, MT. In 2001 Nate and Israel were introduced to Jacque during a music competition and shortly thereafter combined their talents to become an acoustic trio, and Nate and Jacque went on to be married in 2003.

Copper Mountain Band has rapidly expanded their show regions throughout Montana, Idaho, Washington, Wyoming, and Oregon. Last year CMB moved into California, Utah, North Dakota and an international tour in France. Dedication, love for the music, and their ever-growing fan base keeps CMB energized and passionate for success. With over 150 shows a year, CMB will continue to impress fans/friends along the way!

All proceeds from this event will go to the CARD Foundation, the fundraising arm of CARD, to support CARD in its ongoing efforts to provide healthcare, research and outreach to benefit all people impacted by exposure to Libby Amphibole Asbestos. 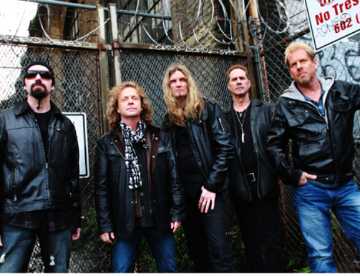