We are proud to announce that Big Sky's event of the year is back! The PBR Touring Pro Division is returning to Big Sky, Mont., on July 31 and Aug 1 at Big Sky Town Center.

This year's event features two nights of bull riding events with 40 elite riders and 80-90 world-class bulls. Riders will vie for a $40,000 added purse, with the champion taking home $20-$25,000. The top four places in each of the three rounds will pay out.

Round one will be held July 31 and round two and the championship ride on Aug. 1. The aggregate score from the first two rounds will determine the 10 riders competing in the championship, on 10 of the toughest bulls.

On July 31, the top rider after the first round will be invited back for a bonus "Bounty Bull," with funds raised by a 50/50 raffle. If he manages to hang on for eight seconds, he'll split the pot with the winning ticket holder. If he gets bucked, half the money will be donated to a local nonprofit and the other half will roll over to next year's bounty.

Each night of competition will be followed by a free concert in Town Center, with all female AC/DC cover band Hell's Belles on July 31, and southwest Montana outlaw country juggernaut The Dirty Shame to close it out on Aug. 1.

Kids 6 and under - $11: Both Golden Buckle and General Admission tickets are $11 for kids ages 6 and under and include a free gift with purchase. Infants do not need tickets.

Rain or Shine. No refunds.Tickets will be available at the Outlaw Partners office after purchase and at WILL CALL the day of the event.

For more information, visit explorebigsky.com/bigskypbr or call The Outlaw Partners office at  (406) 995-2055. 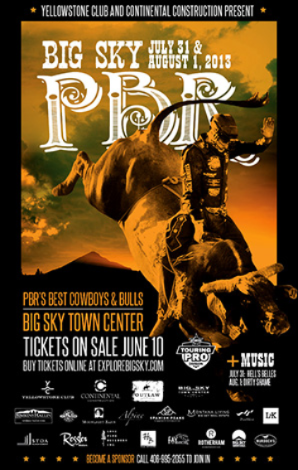