> Events in Connecticut > The Mendelssohn Choir of CT

The Mendelssohn Choir of CT

MCC's performance features musical echoes from the glories of Versailles and music composed for The Sun King.  We explore the compositions of King Henry VIII, the musical eloquence and elan of Handel and Rutter, and the Roman musical advertures of Georges Bizet.

About The Mendelssohn Choir of CT:

Over the past quarter century, The Mendelssohn Choir of Connecticut (MCC) has performed some of the world's greatest choral masterpieces in artistically unique and innovative performances that have earned it a reputation as one of the pre-eminent choral ensembles in New England. The Choir's versatile programming mines an extensive repertoire that embraces musical works of all periods and genres from classical to contemporary, opera to pop. To this end, the Choir excels in fulfilling its mission to develop and promote an appreciation of choral music and to educate its members and the general public in the musical arts.

The Mendelssohn Choir of Connecticut was originally founded in 1984 by alumni of the Fairfield University Chamber Singers who wished to continue a musical association with Dr. Carole Ann Maxwell. Under her baton for over twenty-five years, MCC has performed outstanding repertoire including Carl Orff'sCarmina Burana and Catulli Carmina, Handel's Messiah, Mendelssohn's Elijah, Prokofiev's Alexander Nevsky, Honegger's King David, Bach's Magnificat, Beethoven's Ninth Symphony, Vaughan Williams' A Sea Symphony and Toward the Unknown Region, Haydn's Nelson Mass, and the Requiems of Mozart, Verdi, Faure and Durufle, as well as American songbook entries from Gershwin and Sondheim, and many others.

Over the years, MCC has been honored to present the world premieres of "Prologue" from North and South, by Tony Award winner Charles Strouse, the Academy Award winning song "There Can Be Miracles" by Stephen Schwartz, and "Chief Seattle" by esteemed American composer Gregg Smith. In celebration of its Silver Anniversary the Choir has commissioned a work by Randol Alan Bass, "O Divine Music", which it premiered in May 2010. MCC also debuted Connecticut composer EdWard Thompson's What the Ivy Said to the Falling Snow in February 2010.

Recognizing the talent and achievements of the Mendelssohn Choir of Connecticut, acclaimed ensembles such as the Greater Bridgeport Symphony Orchestra, the Norwalk Symphony Orchestra, and the Wallingford Symphony Orchestra, continue to seek out the Choir for concert collaborations. MCC has also been privileged to perform with both Distinguished Concerts International of New York and Mid-America Productions at Carnegie Hall. In addition to a memorable performance at the 2006 The National Pastoral Musicians' Conference, the Choir has also performed to enthusiastic audiences in Rome, Florence, Prague, Vienna, Budapest and Ireland. MCC returned to Carnegie Hall in January, 2011, for a performance of Karl Jenkins’ Stabat Mater. In this 28th Anniversary Season, MCC is looking forward to its association with The New Haven Symphony Orchestra, under the direction of Maestro William Boughton, with performances of Edward Elgar's The Dream of Gerontius. 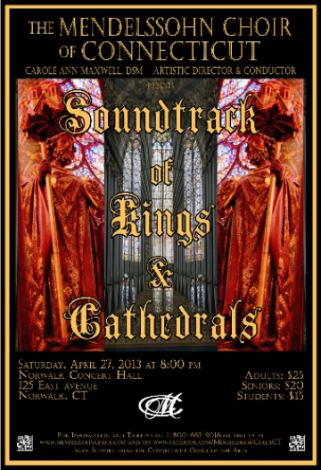