In an attempt to regulate water consumption, the use of private toilets has been outlawed. The citizenry must use public, pay-per-use amenities owned and operated by Urine Good Company, a malevolent corporation run by the corrupt Caldwell B. Cladwell. If you break the Pay-to-Pee laws you're sent to a penal colony called Urinetown! When corporate Everyman Bobby Strong's father falls victim to the very rules Bobby enforces, he must make a stand. What is Urinetown? What happens to those sent there? Why are they never seen or heard from again? Come find out!!

Urinetown runs at Verge Theater (formerly the Equinox Theatre) on Fridays and Saturdays from March 22nd-April 6th. All shows begin at 8pm. Tickets are $12 for General Admission and $10 for students/seniors. Receive a complimentary beverage with every ticket purchase on Opening Night! We're located at 2304 N. 7th Ave. in the strip mall across from Murdoch's. 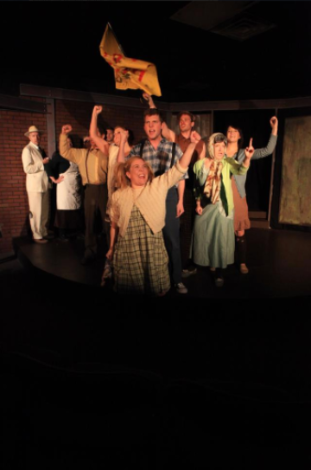