From working at Chicago's Red Carpet Car Wash to appearing on national television, from gigging at the smallest ghetto blues bars to performing on the biggest international concert stages, master bluesman Lil' Ed Williams has come a long way. Mixing smoking slide guitar boogies and raw-boned Chicago shuffles with the deepest slow-burners, Lil' Ed and his blistering Blues Imperials - bassist James "Pookie" Young, guitarist Mike Garrett and drummer Kelly Littleton - deliver the blues, from gloriously riotous and rollicking to intensely emotional and moving. Not since the heyday of Hound Dog Taylor & The HouseRockers has a blues band made such a consistently joyful noise. Currently celebrating 24 rip-roaring years together, Lil' Ed & The Blues Imperials ply their musical talents with skills that have been honed to a razor's edge. As much a family as a band, Lil' Ed, Pookie, Mike and Kelly have outlasted sports stars and presidents, musical fads and fashion trends. And together, they continue to make blues history with each and every performance and new recording.

The band's wildly energetic and seriously soulful new CD Jump Start is jam-packed with Lil' Ed's incendiary slide playing and rough, passionate singing, as the ragged-but-right Blues Imperials cook like mad alongside him. Produced by Williams and Alligator president Bruce Iglauer, it is a tour-de-force of untamed slide guitar, rock solid rhythms, heartrending ballads and authentic deep blues vocals. Williams wrote or co-wrote 13 of the album's 14 songs, ranging from the non-stop boogie blast of If You Were Mine to the heart-on-his-sleeve honesty of Life Is A Journey to the bouncing and jazzy Jump Right In to the swaggering, autobiographical Musical Mechanical Electrical Man. The album overflows with the band's full throttle drive and is fueled by Lil' Ed's love of both serious blues and good time fun. Jump Start reveals a band firing on all cylinders and ready to spread the genuine houserockin' fever to their biggest audience yet. "It's all blues, really," says Lil' Ed. "Some of it will make you dance, some will ease your soul Through my music, I want people to feel what I feel."

Blues history runs deep through Lil' Ed's blood - his uncle and musical mentor (to both Ed and his younger half-brother Pookie) was the great Chicago slide guitarist, songwriter and recording artist J.B. Hutto (author of the only non-original on Jump Start, If You Change Your Mind).  According to The Chicago Tribune, "Williams represents one of the few remaining authentic links to pure Chicago blues." The Associated Press agrees, stating, "Williams fills Chicago's biggest shoes with more life and heat than anyone on stage today."

Born in Chicago on April 8, 1955, Ed grew up surrounded by music. He was playing guitar, then drums and bass, by the time he was 12. Ed and Pookie received lessons and support from Hutto. "J.B. taught me everything I know," says Ed. "I wouldn't be where I am today without him." Ed and Pookie spent their teen years making music together, and in 1975 formed the first incarnation of The Blues Imperials. They played their first gig at a West Side club called Big Duke's Blue Flame, splitting the $6 take four ways. Over the next few years, the group played every club in the neighborhood. On one occasion, Hutto brought Ed and Pookie on the road to accompany him. The two teenagers had to paint fake mustaches on just to get into the club. But once in, they both got an advanced lesson in putting on a show and delivering the goods. As young men they kept gigging, but they still needed day jobs to pay the bills. Ed worked ten hours a day as a buffer at the car wash. Pookie drove a school bus. Night after night they played their roaring brand of blues in tiny clubs, and eventually the word reached Alligator president Bruce Iglauer.

At the time, Iglauer was looking for local talent for The New Bluebloods, an anthology of some of Chicago's younger blues musicians. "Ed and his band had a good reputation," recalls Iglauer. "I had only seen them live once or twice. I knew Ed was a hot slide player, but I had no idea what he and the band were really capable of. I just knew that their music reminded me of Hound Dog Taylor and J.B. Hutto, two of my favorite musicians. It seemed like having a band this rough and ready would be a nice change of pace for the anthology, so I asked them to come down to the studio and cut a couple of songs. I never expected what happened."

The band-never having been in a recording studio before-treated the studio like a club, playing live to Iglauer, the engineer, and all the people on the other side of the control room glass. After Ed recorded just two songs, the Alligator staffers were on their feet begging for more. Two songs later, with Ed doing his toe-walks and backbends, even the engineer was dancing. Iglauer offered the band a full album contract on the spot. The end result of the session was 30 songs cut in three hours with no overdubs and only one second take. Twelve of those songs became the band's debut album, Roughhousin', released in September of 1986.

The national press reacted with amazement to the blues world's new discovery. Feature stories ran in Spin, Musician, The New York Times, The Los Angeles Times, The Washington Post, The Boston Globe, The Chicago Tribune and dozens of other publications. The Village Voice declared, "Roughhousin' just may be the blues album of the year." The New York Times raved, "Raw-boned, old-fashioned Chicago blues has a new young master - Lil' Ed Williams." "They blow down the walls," said Guitar Player. "Dim the lights, turn up the stereo, and let the house party begin."

But it wasn't until 1987, when guitarist Mike Garrett joined the band, and a year later, when Garrett recruited his Detroit hometown friend Kelly Littleton to play drums, that things really began to take off. Garrett's risk-taking rhythm guitar work and Littleton's conversational, old school drumming were the perfect complement to Lil' Ed's and Pookie's rambunctious playing. With their 1989 album Chicken, Gravy & Biscuits, doors opened and audiences poured in. Through relentless touring, the group crystallized, becoming tighter with each performance, more telepathic in their abilities to read each other's musical moves. Their spontaneous and unpredictable live show became legendary among blues fans worldwide. Spurred on by the band's rowdy performances, a legion of fanatical fans, proudly calling themselves "Ed Heads," eagerly spread the word.

Lil' Ed & The Blues Imperials released six Alligator albums between 1989 and 2008. With each one, the band's stature grew as their fan base continued to expand. With 2006's Rattleshake, Ed and company reached a whole new audience. Die-hard "Ed Head" Conan O'Brien brought the band before millions of television viewers on two separate occasions. Then, in June 2008, celebrating the release of Full Tilt, Ed hit the main stage at The Chicago Blues Festival, performing in front of 100,000 screaming fans, as he whipped the overflowing crowd into a blues-induced frenzy. The band won the prestigious Blues Music Award for Band Of The Year in both 2007 and 2009 and also took home the Best Live Band Award in the 2011 Living Blues Critics' Poll. Blues Revue said, "Listen and hear how a great blues player can make a guitar weep...Lil' Ed is a blues master at the top of his game."

Now, with Jump Start, Lil' Ed & The Blues Imperials will continue bringing their seriously inspired and wildly fun Chicago blues to "Ed Heads" new and old, wherever they may be. After almost a quarter century together, Lil' Ed, Pookie, Mike and Kelly have played thousands of gigs, logged tens of thousands of miles and have no plans to slow down anytime soon. According to Littleton, "The journey has been amazing. We melded right away and have kept growing." Garrett agrees, saying, "It's a perfect fit. And we keep getting better." Young adds, "We are way stronger now, and we're still having fun. My dreams have all come true."

"Long ago," recalls Lil' Ed, "Uncle J.B. told me, 'When you get the right guys in your band, you'll know.' When Mike and then Kelly joined up with me and Pookie, we just clicked. I knew. We are a family," says Lil' Ed, summing it all up. "And families stay together." 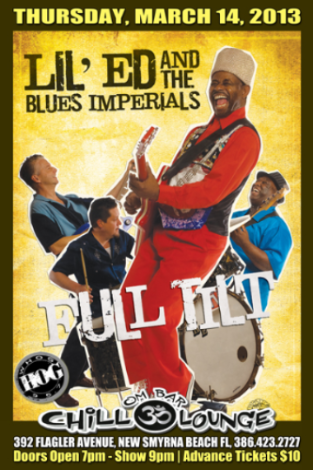