The Subversive Way of Jesus

Sponsored by the Progressive Christian Forum of Santa Cruz, this 2-day event features one of Progressive Christianity's most exciting voices: The Rev. Dr. Robin Meyers of Mayflower Congregational Church in Oklahoma City.  Over two days, Christians from all walks of life will focus on the BIG PICTURE: what the church can be and what it should be!  Dr. Meyers constructs a vision of an UNDERGROUND CHURCH--a church far more like the first three centuries than the last seventeen.  This new underground church is SUBVERSIVE RATHER THAN SAFE, Jesus-centered rather than tradition-centered, and calls for deep involvement by followers rather than marginal participation by members.

The underground church is a NONVIOLENT COMMUNITY that replaces the world "faith with the world "trust"; values authenticity over orthodoxy; makes Jesus a model for living rather than an object of worship; builds coalitions by working with others on issues of peace, radical hospitality, and economic justice; and stands out from the dominant culture by engaging in subversive acts motivated by experience; expands the communion meal into a true feast; addresses issues of economic injustice; empowers activists and participates in creative noncooperation; favors counterimperial praxis over doctrinal uniformitiy; talks less and does more; and does no harm when harm can be avoided.  In short, the underground church reclaims the subversive way of Jesus for our age!

The event begins Friday, February 8 (7:30 to 9:00 pm) at Calvary Episcopal Church in downtown Santa Cruz and continues Saturday, February 9 (9 am to 3 pm) at First Congregational Church on the Westside. 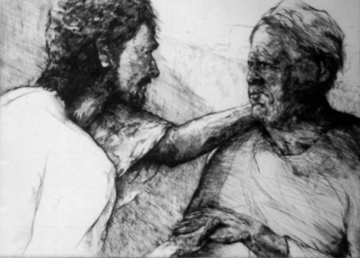