Centsible Media is the title sponsor of this event!

JIMI JAMISON continuously acclaimed as one of the top rock male vocalists in our lifetime. Jimi Jamison is the former lead singer of Survivor, Cobra & Target. His hits include "High On You", "The Search Is Over", "I Can't Hold Back", and the Baywatch theme song, "I'm Always Here." Jimi's performance of "Eye of the Tiger" has been well recieved all around the world.  Jimi is now performing as a solo artist in venues around the U.S., Europe and South America. His current hit "Never Too Late" is on top of the charts in Germany and Europe.

Jimi will perform all of his hit songs with Headliner.

**Have your picture, your family or your group picture professionally taken with Herb Brooks' 1980 "Miracle on Ice" Olympic Gold Medal for a donation to the Herb Brooks Foundation! ?

The Herb Brooks Foundation is dedicated to providing more opportunities for kids to play the game of hockey. True to his words, the Foundation will assist in, "making hockey fun for kids and letting them learn to love the game the way we did."

. The Dean Weisser Band will open up for Jimi Jamison on Friday March 1st at Mn Music Cafe... These guys are like family and one of the best classic blues rock bands in the cities... 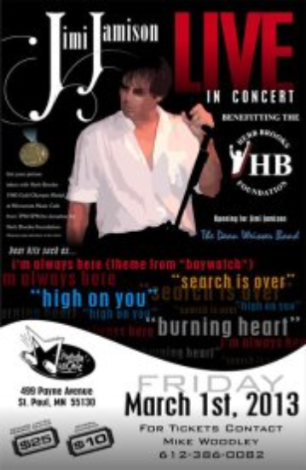