Grace Potter and the Nocturnals

Grace Potter & the Nocturnals' self-made 2005 debut album, Nothing but the Water revealed a musically sophisticated young band inspired by the music of the late 60s/early 70s and fronted by a then-21-year-old dynamo whose nuanced singing, organ-playing and songwriting belied her age. The follow-up, 2007's This Is Somewhere, confirmed that the band had no interest in following trends but was instead in pursuit of timeless expression as it forged its identity. On 2010s self-titled third album, GPN, toughened by a half-decade of nonstop roadwork, flexed their rock 'n' roll muscles and confirmed that they were in it for the long haul.

Seven years after hitting the radar, GPN take an exponential leap with the widescreen opus The Lion The Beast The Beat, released in 2012. With this musically combustible and conceptually dazzling work, the Vermont-based band forcefully takes its place alongside the best of its peers while building on the rich legacy of its inspirations. During this a la carte age, Grace Potter and the Nocturnals have boldly pushed against the current, making a bona fide album that demands to be heard in its entirety.

Potter was a student at St. Lawrence for two years, and formed the band at St. Lawrence with drummer Matt Burr, a Class of 2003 graduate. They are joined by Scott Tournet, Benny Yurco and Michael Libramento. 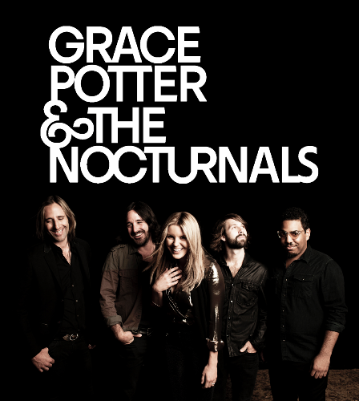