Hailing from Chicago, Run and Punch is a female fronted 7 piece band that set out to keep the ska/punk sound alive and exciting.

The musicians in the band have been friends since high school, and over the years they developed an interest from several music genres, from jazz and soul to funk and punk rock... all elements that when mixed together help define the explosive, eclectic and uptempo sound of the band!

Stoplight Jones is a four-piece rock band from Chicago, IL. Joshua, Brady, Carter and Steve all met while studying jazz at Western Illinois University, and have taken their jazz training and applied it to meticulously crafting interesting, catchy and powerful rock tunes.

"We are the illegitimate children of kevin spacey and abraham lincoln!"

"A band of pokemon training wayfarers. coming to a local haunt near you."

Forever friends and now band-mates, Minor Wits (out of Chicago, IL) is a three-piece pop/rock band that started writing tunes together in the fall of 2011. Eric, Nolan and Brad spent their first year as a group playing around Chicago and the mid-west, but recently spent time at Uptown Recording Chicago to lay-down what has become their debut, "Bedroom Blues." You can stream and purchase "Bedroom Blues" via the bands bandcamp page.

For more info go to swizzlesteve.com! 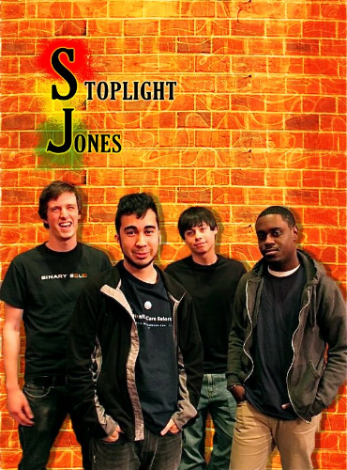