Maria Aleida Rodriguez is quickly establishing herself as one of the leading coloratura sopranos of our time. Her vocal virtuosity is thrilling audiences worldwide. A graduate of the prestigious Academy of Vocal Arts in Philadelphia, Maria Aleida tours with Andrea Bocelli in South America and Europe and will be coming to St Hugh after her Grand Garden Arena concert with Mr. Bocelli at the MGM Grand in Las Vegas. She is a prizewinner in the Montserrat Caballe International Voice Competition and the Metropolitan Opera National Council Auditions. She has sung the leading roles at the Rossini Opera Festival and will have her Asia debut with the Musashino Cultural Foundation in Tokyo after her St Hugh recital.

Maria Aleida will be accompanied by Roberto Berrocal, Spanish pianist and the Artistic Director of the newly founded St Hugh Steinway Concert Series. He is also the Music Director of St Hugh Catholic Church where these concerts are taking place.  Mr. Berrocal is a graduate of the prestigious New England Conservatory in Boston. He came to Miami as part of the Florida Grand Opera Young Artist Program. He is sought after both as an accompanist for opera singers and as a concert solo pianist. He has been invited by Placido Domingo to the National Opera in Washington, DC as well as the San Francisco Opera. He is also the official pianist of the National Voice Competition of YPO – Florida Grand Opera which will take place at the Arsht Center in April 2013.  As a concert pianist he is the winner of the Blütner Foundation International Piano Competition, semifinalist of the Hilton Head International Competition and prize winner of the Princess Cristina National Piano Competition in Spain. 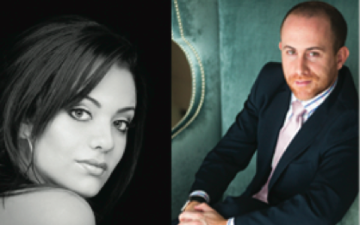