> Events in Montana > Vootie Presents an evening with HOT TUNA

From their days playing together as teenagers to their current acoustic and electric blues, probably no one has more consistently led American music for the last 50 years than Jorma Kaukonen and Jack Casady, the founders and continuing core members of the iconic blues-roots band Hot Tuna.

Now members of the Rock & Roll Hall of Fame, the pair began playing together while growing up in the Washington D.C. area, where Jack's father was a dentist and Jorma's father a State Department official. While a junior and senior high student, Jack played professional gigs as lead guitarist at night before he was old enough to drive. Jorma, four years older than Jack, started college in Ohio, accompanied his family overseas and then returned to college, this time in California. Along the way, Jorma became enamored of the guitar playing of Rev. Gary Davis and became a master of his finger-picking style. Meanwhile, Jack took an interest in the electric bass--at the time a controversial instrument in blues, jazz, and folk circles.

In the mid 1960’s, Jorma was asked to audition to play guitar for a new band that was forming in San Francisco. Though an acoustic player at heart, he grew interested in the electronic gadgetry that was beginning to make an appearance in the popular music scene, particularly in a primitive processor brought to the audition by a fellow named Ken Kesey. Jorma decided to join the band and soon thereafter he summoned his young friend from Washington, who now played the bass. Thus was created the unique (then and now) sound that was The Jefferson Airplane. Jorma even contributed the band's name, drawn from a nickname a friend had for the blues-playing Jorma. Jack's experience as a lead guitarist led to a style of bass playing which took the instrument far beyond its traditional role.

While in The Jefferson Airplane, putting together the soundtrack of the sixties, Jorma and Jack remained loyal to the blues, jazz, bluegrass and folk influences of the small clubs and larger venues they had learned from years before. They would play together, working up a set of songs that they performed at clubs in the Bay Area, often after having played a set with the Airplane. This led to a record contract; in fact, they had an album recorded before they decided to name their band Hot Tuna. With it, they launched on an odyssey which has continued for more than four decades, always finding new and interesting turns in its path forward.

The first thing an early Hot Tuna fan discovered at their concerts of the early 1970’s was that the band was growing louder and louder. In an era in which volume often trumped musicianship, Hot Tuna provided both. The second thing a fan would discover was that Jack and Jorma really loved to play. "Look around for another band that plays uninterrupted three- to six-hour sets," wrote reviewer Jerry Moore. What Moore could not have known was that had there been no audience at all, they would have played just as long and just as well, so devoted were they to making music. Of course, the audience wasn't superfluous by any means; it energized their performances and continues to do so today.

Album followed album--more than two dozen in all, not counting solo efforts, side projects and appearances on the albums of other bands and performers. They continued to develop their interests and styles, both together and in individual pursuits. In an era in which old bands reunite for one last tour, Hot Tuna can't because Hot Tuna never broke up.

Along the way, they have been joined by a succession of talented musicians: drummers, harmonica players, keyboardists, backup singers, violinists, mandolinists, and more, all fitting in to Jorma and Jack's current place in the musical spectrum as two of America’s most important rock musicians. Rolling Stone has named Jorma one of the top guitarists of all time, while Jack is considered one of today’s most innovative electric bass players, having played with such legends as Ray Charles, Jimi Hendrix and the Grateful Dead.

After two decades of acoustic and electric concerts and albums, the 1990’s brought a new focus on acoustic music to Hot Tuna. They played more intimate venues with a more individual connection to the audience. Soon, the loud electric sound (and the semi trailer load of equipment) disappeared entirely from Hot Tuna tours. Maturity brought the desire to do things in addition to being a touring band. Both had become interested in teaching, passing along what they had learned and what they had uniquely developed to a new generation of players.

In 1998 Jorma and his wife Vanessa opened Fur Peace Ranch Guitar Camp in the beautiful rolling Appalachian foothills of southeastern Ohio. Here, on a sprawling, rustic, yet modern campus, musicians and would-be musicians come for intensive and enjoyable workshops taught by Jorma, Jack, and other extraordinary players, learning things that range from different styles of playing to songwriting, performing, storytelling and making a song one's own. In addition, they started BreakDownWay.com, a unique interactive teaching site that brings their musical instruction to students all over the world.

In addition to their teaching, Jorma and Jack continue to tour as much as ever, both as a band and as solo performers. Jack released his first solo CD, Dream Factor, on Eagle Records in 2003. Jorma has released many solo albums over the years, including his legendary album Quah, his Grammy-nominated Blue Country Heart and two highly acclaimed releases on Red House Records.

For the last few years, Jorma and Jack have been joined in most of their Hot Tuna performances by the mandolin virtuoso Barry Mitterhoff. A veteran of bluegrass, Celtic, folk, and rock-influenced bands including Tony Trischka and Skyline, Hazel Dickens andBottle Hill, Barry has found a new voice in working with Hot Tuna, and the fit has been good. Watching them play together, it's as if he's been there from the beginning. In addition to rounding out their acoustic sound, Barry brings out a wide array of electric mandolins and similar instruments that most people have probably never seen or heard before. 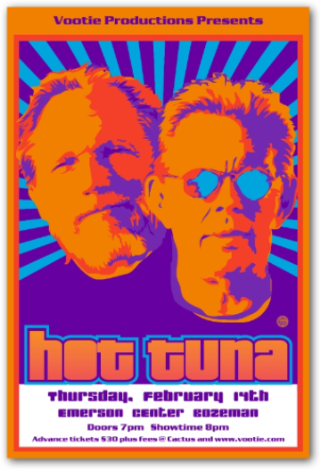