Get in the Cage II

Big Bully MMA.com will bring MMA Cage Fighting back to the Ohio Valley with "Get in the Cage II". The SEASON'S BEATINGS fight card will take place on Wednesday, November 21, 2012 being held at the James Carnes Center, 45300 Roscoe Road, Saint Clairsville, OH 43950. Fighting starts at 7:00 PM.  Doors open at 5:30 with DJ Ben Mannypenny.

Come joins us the night before Thanksgiving and watch as many up and coming fighters bid for position locally and nationally. If you are feeling real frisky the NOON weigh ins will be held at Chapz Bar & Grill, located just up the road from the Carnes Center.  Chaps will have drink and food specials running all day for the Season's Beatings fight card. Feel free to stop in or call Chapz Bar & Grill, 42478 National Road West, Belmont, OH 43718 phone 740-782-0069.

The undeafted Branko Busick on a KO winning streak and making a comeback after leaving football as a former Division I linebacker at WVU will attempt to keep his winning streak in place. Scheduled to make his debut in the cage also is his fellow WVU Linebacker Zach Flynt. Another local favorite and Marshall University Linebacker, Cody Tominack will fight in the Light Heavyweight Division.  We didn't didn't leave out West Liberty either - Jarod Shaw will be representing the Hilltop.

Our sponsor tables are priced to sell and bring your business the marketing value that MMA has been known to achieve. Contact Billy Robinson at 3049146045 for information.

Come joins us for a great time the day before Thanksgiving! 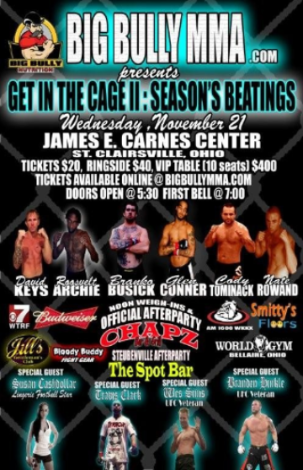