San Francisco’s Tea Leaf Green and Nashville standouts Moon Taxiare excited to announce select co-headlining dates together for this Fall. Starting on October 30 both bands will hit the road for a run of dates in some of the biggest college towns in the Southeast. The tour also includes a must-see performance on Halloween night, October 31, at the Bama Theatre in Tuscaloosa, AL.

Moon Taxi, who is currently on tour with Matisyahu and Dirty Heads, announced new Fall and Winter tour dates last week with Galactic, Umphrey's McGee, and Dr. John, as well as a number of headlining shows. The band, who delivered two outstanding performances at this year’s Bonnaroo and Lollapalooza festivals, continue to ride the success of their debut full-length album, Cabaret, with festival performances at Jublio Music Arts and Music Festival, Starry Nights Music Festival, and Bear Creek Festival. Be on the lookout for even more dates to be announced soon.

Earlier this summer Tea Leaf Green filmed a new DVD entitled Live at State Bridge, which captures the band putting on a powerful performance at one of Colorado's most beautiful venues. Filmed using 5 HD cameras, the release is packed with over 2 hours of footage, including the entire performance, interviews with the band and two bonus songs performed during soundcheck. Live at State Bridge gives viewers a glimpse in to the world of TLG through candid interviews with the band discussing life on the road, the music they enjoy most, and the new album in the works. 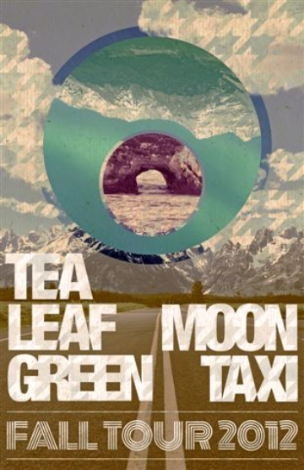