Over 100 years of comedy experience entertaining people locally,nationally and worldwide.Frank De Lima has been entertaining Hawaii with family friendly localstyle humor for 36 years.  The 14 time Na Hoku Hanohano award winnerhas been busy visiting Hawaii school children with his studentenrichment program.  Frank has been touring nationwide with Augie T.for the past 2 years.Mel Cabang has been a comic and business man in Hawaii for 40 years.You can see Mel on numerous tv commercials and local tv programs.Andy Bumatai has been a comic for over 30 years.  He has traveled as aheadliner in comedy clubs across America.  He has opened for some ofthe biggest acts in the industry. Tom Jones, Paul Anka, Kenny Loggins,The Beach Boys and Lionel Richie.Augie T. performs live on stage and on television for audiences herein the islands as well as across the United States. He was voted thefunniest comic in Hawaii by Star Bulletin and Midweek and has been thecore artist in the revival of the Hawaii comedy scene these past few 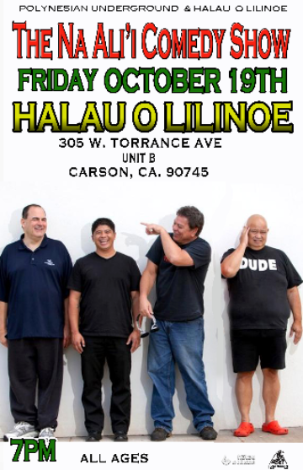