Holly started her musical career as a co-founder member of all girl garage band Thee Headcoatees, who were Thee Headcoats splinter group in 1991. Holly made her first solo album, The Good Things, in 1995. Although often connected with garage rock, Holly's music is more a mixture of pre-rock electric country blues, folk and less frantic rock & roll. It brings to mind a bourbon soaked honky tonk bar, evenings on a dusty front porch with your faithful hound, cracked hearts and foot stomping good times. She creates a world all of her own, one that's warm hearted, true to it's roots and not swayed by fads and fashions.

Since her debut in 1995, Ms Golightly has been a rather prolific lass, releasing 14 long play solo records and umpteen singles (too many to list here) for a wide variety of labels and has toured America, Australia, New Zealand and Europe regularly.

Holly has collaborated with all kinds of folks, including the 1999 release with? Billy Childish 'In Blood', on which the two gleefully celebrate one chord, one sound, one song. Another notable collaboration is 2001's 'Desperate Little Town' with Dan Melchior. After playing with The White Stripes in the USA, and supporting them at a few London shows, the three of them became friends, and the trio recorded 'It's True That We Love One Another', for the White Stripes album Elephant. Holly has also recorded with The Greenhornes and they released a special Christmas 2002 single together on Damaged Goods called Little Stars. Holly also appears on the Greenhornes album Dual Mono. She has also been a guest vocalist on various other bands projects, including live with Mudhoney and Rocket From The Crypt, appearing on several releases with them. On the b-side of her 7" Walk A Mile, there's an exclusive duet, 'Don't Fuck Around With Love', featuring the ever-so wonderful Sexton Ming. And well worth a listen is her guest vocal on The Flaming Stars new album, 'Born Under A Bad Neon Sign'. 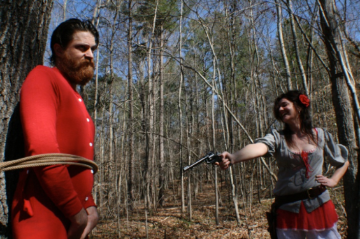