In 1987, a civil war drove an estimated 20,000 young boys from their families and villages in South Sudan. Most just six or seven years old, they fled to Ethiopia to escape death or induction into slavery and the northern army. They walked more than a thousand miles [through lion and crocodile country, eating mud to stave off thirst and starvation. Wandering for years], half of them died before reaching a Kenyan refugee camp [Kakuma]. The survivors of this tragic exodus became known to the world as the Lost Boys of Sudan. [Through the next fourteen years of loss and suffering, these remarkable young men pursued their educational goals in the UN refugee camp.] In 2001, close to four thousand Lost Boys came to the United States seeking peace, freedom, and education.

The Lost Boys and Girls have not forgotten their family and friends who are still threatened in Southern Sudan by ongoing violence, lack of clean water, food, and vital medical supplies. The Lost Boys, now men, have gathered together yet again, but this time, in hope rather than in despair, to raise much needed funds that will save lives of a peaceful people ravaged by the violence of decades long genocide and the newest generation of “Lost Boys”.

Although just one year ago Southern Sudan was declared independent from Sudan, violence in Southern Sudan continues. Yida, although a village suffering through  a humanitarian crisis itself, is now home to one of the fastest growing refugee camps in Southern Sudan. Awoda and Yida villagers will benefit greatly from the much needed food, medical supplies, clean water, mosquito nets, clothing and other vital supplies that the benefit concert will provide.

To learn more about the event, the San Diego Lost Boys and their foundation please go to our website:

Thank you for your support.

Parking available for $5.00 in covered structure across from the Westin Hotel on Colombia street. 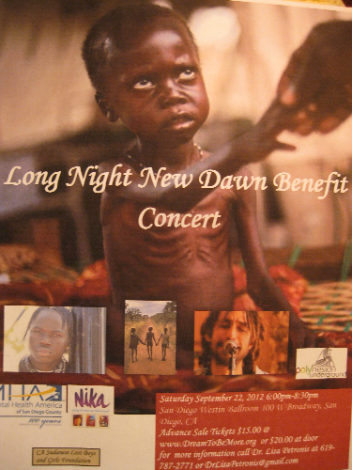