Three DJs tag team for an amazing night of dance/trance/hiphop music at Horn's Gaslight Bar's legendary Booty Night.?DJ Brevin-Mackinac Island, MIOur own homeboy DJ Brevin (Brevin Cawthorne) is well known all over Michigan but especially on Mackinac Island for his club work, signature cratches, mixes, mashes and the way he revs up the crowd. He's done shows for Kid Rock, Tito Bacardi, Tom Izzo and more on and off Island. Brevin is a legend on Mackinac Island, come feel what the fuzz is all about.

DJ Psycho-Flint, MIThe first thing that you notice about DJ Psycho (Dezi Magby) when he plays is that he pays absolutely NO attention to the rules. Genres? Mere suggestions. Somehow he ties everything together quicker than your brain can process the method. He engages the audience in a sort of willful combat for the soul of the party, leaving you at once satisfied and begging for more. Musically knowledgeable with a flair for the dramatic, Psycho bridges the gap between the technical aspects of being a DJ and the stage antics of a rock star, all while EXCLUSIVELY using vinyl. Not many DJs have that sort of controlled chaos as their calling card these days; he is at once a throwback and the wave of the future.?? 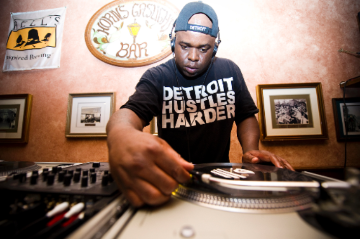