The year is 1899 — American inventress Divinia von Presterton has challenged Lord Tiberius Q. Braithwaite to a race around the globe in their respective steam-powered airships.  The prize?  Divinia’s entrance to the all-male Metcalfe Society of scientists, inventors, and adventurers in England.  Along the way they and their friends Nikola Tesla, Annie Oakley, and an only-slightly-zombified Benjamin Franklin have already thwarted the evil plot of Thomas Edison and Henry Ford to take over the U.S.A.!  Now the race is ready to resume, but along the way they will find a shadowy conspiracy of industrialists, artists, and prophets who have already put their next fiendish plan into motion:  a robotic Queen Victoria now sits on the throne of Great Britain and an army is mobilizing to attack and reclaim their former colonies, the United States of America!  Thomas Edison has already regrouped at his bathysphere deep below the surface of the Atlantic Ocean and is finishing his steam-powered giant squid!  Will England survive intact?  What does Nostradamus REALLY know about the future?  And exactly how does our sponsor Button Soups fit into all of this?  Strap on your monocles and boots: action, adventure, and steam power combine into a tale that will thrill and delight you!? 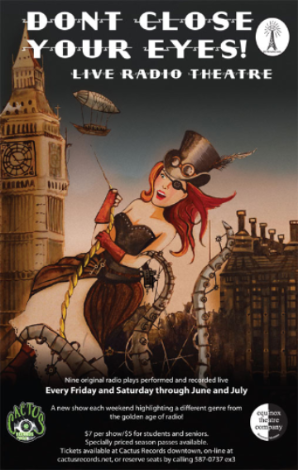