Dame Edna on the OBX

Michael L. Walters has been delighting audiences for over ten years with his impersonation of Dame Edna which Provincetown Magazine calls "a dead-on homage to the famous saucy Aussie." Walters is so perfect as Dame Edna that Barry Humphries, creator of Dame Edna Everage, calls his performance "spectacular!" The longest-running authorized Dame Edna impersonator, Michael is also the only impersonator who wears replicas of the Dame's fabulous gowns and even performs her classic musical numbers! A lifelong veteran of the stage, Walters delivers a "theatrical tour de force" (says Orlando Weekly) as the world's most iconic and entertaining gigastar!?

Included in this ticket package is a 2nd show, opening for Dame Edna at 8pm.  The cast of The Lost Colony outdoor drama will present a Broadway Cabaret of fully choreographed songs from the most popular Broadway shows!  All this for only $25!!  Two shows for the price of one!  Doors open at 7:30pm! 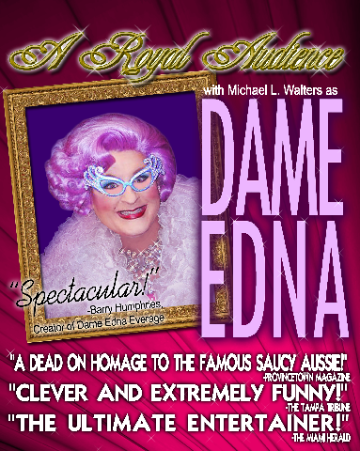