Blood Sisters began when Barbara Payton, Michelle Chenard and Mary McGuire met up as individual performers at the Mackinac Island Music Festival a few years ago. Then they met their current dynamic rhythm section last summer at the Mackinac Island Music Festival and the band was born. They played the Festival last summer opening for the Howling Diablos to much acclaim and were asked back by the concertgoers. To date, Blood Sisters have compiled original songs from their collective catalogs and have been busy crafting new music.

Collectively, this band has logged miles of highways across America playing clubs, paying dues and are excited to come together as a team.

To Detroit audiophiles who have been around a while, she’s best known for her work with punk priestess Patti Smith and for fronting the late ‘80s/‘90s super group Detroit Energy Asylum. DEA had a lineupcontaining some of the best musicians in the business, including saxophonist David McMurray (KidRock), Luis Resto (Eminem), Vinnie Dombrowski (Sponge, Crud), and many others. Once a 16 year-old playing in punk bands in the seediest venues of Detroit’s musical underbelly, this classically-trained pianist and self-taught guitarist has since played Lollapalooza, Italy, the UK, and Japan. Being both a close friend and musical colleague of Patti Smith, Carolyn has the distinction of being one of the few invited to perform at the prestigious Meltdown UK Festival (2005), curated by Smith. There, Carolyn opened for Steve Earle and shared the stage with the likes of Tori Amos, Sinead O’Connor, Marianne Faithful, Yoko Ono and others of such celebrated musical calibre. 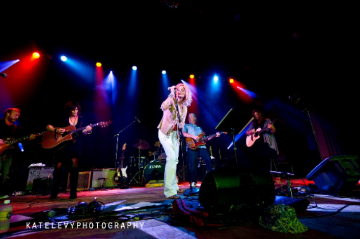