The Mackinac Island Music Festival presents a night of folk music. Dick Siegel is a legendary Michigan-based singer/songwriter known for his engagingly unconventional lyrics and a dynamic songwriting style that incorporates modern folk, roots and jazz. This evening, he will be joined by his band, The Brandos.

Audra Kubat is a Detroit born singer-songwriter. She began composing music on the piano at eight year of age. In her late teens she starting put words to her music. Teaching herself to play the guitar, she began performing in local coffeehouses. In 2000 Audra was nominated for five Detroit Music Awards, winning one for Best Folk Artist, this is her third season with the Mackinac Island Music Festival. Audra is one of a kind and we love her here on Mackinac Island. 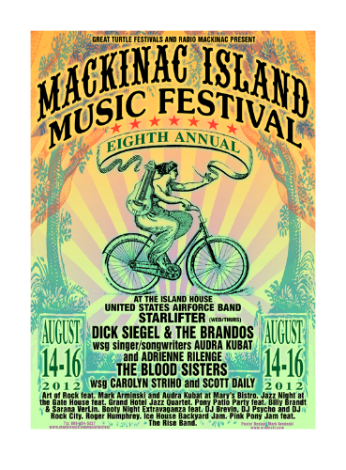