The California Youth Chinese Symphony (CYCS) will continue its celebration of its 5th anniversary this month. The CYCS orchestra will be performing on May 20, at the newly-opened world class Center of Performing Arts in Menlo-Atherton High School of Palo Alto.

The CYCS orchestra comprises mostly Asian Americans from 9-18 who play Chinese traditional instruments. Since its debut in 2007, the orchestra has gradually transformed into a more mature form since receiving training from conductor Jindong Cai, who is a music professor at Stanford University and the conductor of the Stanford Symphony Orchestra. In the Colorful Melody concert series, the orchestra will be presenting repertoires such as Festival Night, a spirit-lifting music that leads you to dance with the people celebrating their festival. Ambush From All Sides, is an ancient song that becomes a symphony music that magnifies the intensity and ferocity of the battles between the two armies of Chu and Han. The Lyrical Chant is an adaptation of J.S. Bach’s Prelude in C with a Chinese melodic theme.

The concert will also feature a pipa concerto Little Sisters From the Prairie, played by master Hecheng Liu. The music praises the bravery of two sisters who fearlessly protect their flock of sheep in a storm.  The Peking opera style A Walk into the Village is an ensemble piece played by the two-string Chinese violins. There will also be other classical pieces performed by the pipa (lute) and dizi (bamboo flute) ensembles.

On May 27th, the Junior Students Concert will be presented by the younger musicians who are still in their early stages of instrument training. Most students are between age 6-16 and some students started learning their instruments only since last year. The Junior Orchestra will be playing a Shanbei folk song Story of the Thirty-Mile Village and an unconventional but cheerful Axi Dancing to the Moon. Other songs played by various instrument ensembles include the Little Flower Drum, Taiwanese folk song Little Road in the Village, classics Golden Snake Dance and Full Moon with Blossoming Flowers played by the various instrument ensembles. 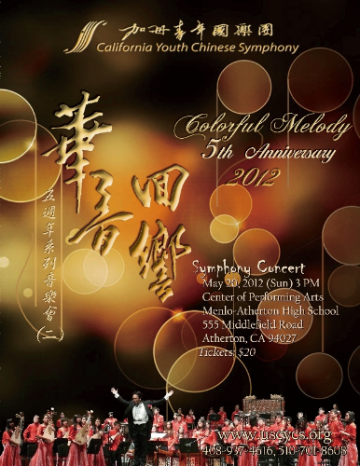