Ready for something different? Skinny Sundays is one of the fastest growing comedy shows in Hollywood, bringing together some of the biggest names in comedy, along with some of its best-kept secrets. Skinny Sundays is the singular night of unfair stand-up comedy in Los Angeles, pitting comics against each other in ridiculous head-to-head competitions for the right to perform. And your enjoyment. Let the games begin!

Every month at the World Famous Hollywood Improv. 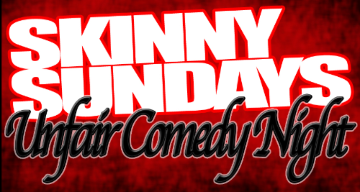