What do you get when you cross a Mississippi Good ol’ boy with a vegetarian musical comedy buff? You get Mack & Jamie, Jay Leno’s favorite comedy duo, and the most requested comedy team working today! If continuous, unstoppable funny is your destination, Mack & Jamie are your bullet train to side-splitting laughter. Ta Da…The Mack & Jamie Big Sky Comedy Road Show is coming to your town, and you won’t be disappointed! This seriously side splitting show features the seasoned veterans of their own television series, writers and stars of highly acclaimed, long running stage shows, featured movie roles, continuing characters and guest stars on many TV series, comedy writers for the best in the business, voice actors in numerous feature films for Adam Sandler and others, plus commercials and video games. In these days of “harsh” comedy, Mack & Jamie continue to prove that comedy is merely that which is funny…artfully delivered. The Mack & Jamie Big Sky Comedy Road Show thrives on that philosophy and sets out across Montana and Northern Wyoming in May to prove it. Mega stars? Not really. Household names? Nope. An act that commands $55 ticket prices? Not on your life…in fact these guys can cram more laughs into a Twenty three dollar ticket than an overweight teenager can. 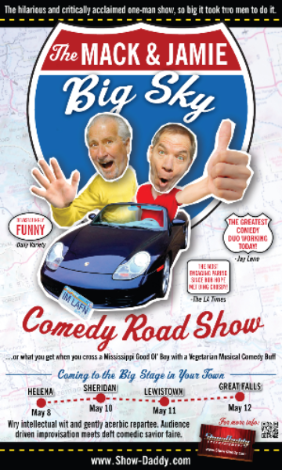